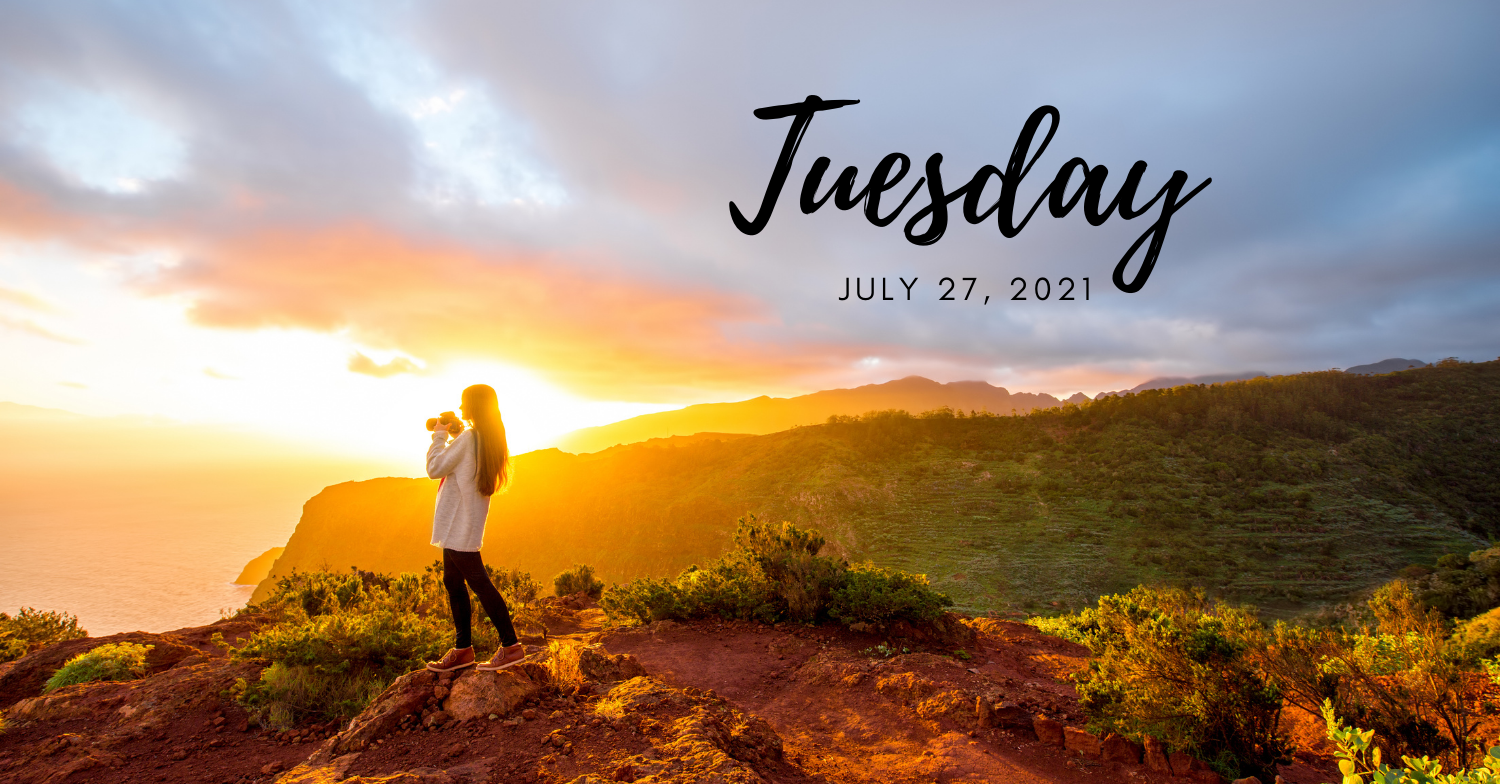 * Department Of Veterans Affairs Becomes The First Federal Agency To Issue Vaccine Mandate: 115,000 Frontline Workers Have Eight Weeks To Get The Shot Or Face Getting FIRED

* U.S. To Maintain Travel Restrictions Due To Delta Variant

* Biden Admin Says 'Long Covid-19' Could Qualify As A Disability

* Unusually Large Meteor Soars Through The Skies In Norway

* American Airlines Warns About Fuel Shortages Around The Country, Asks Pilots To Conserve

* 'Holy Moly!' Inside Texas Fight Against A Ransomware Hack

Just when people were beginning to wrap their heads around the delta variant of COVID-19, this week, Texas’ hospital system has become the first to report a case of the lambda variant.

BREAKING NEWS: Department Of Veterans Affairs Becomes The First Federal Agency To Issue Vaccine Mandate: 115,000 Frontline Workers Have Eight Weeks To Get The Shot Or Face Getting FIRED

The Department of Veterans Affairs (VA) on Monday become the first federal agency to require its frontline health care workers to be vaccinated.  President Joe Biden confirmed the move in a brief statement to reporters Monday afternoon.'Yes. Veteran Affairs is going to in fact require that all docs working in facilities are going to have to be vaccinated,' Biden said, following a report quoting his Veterans Affairs secretary regarding health care workers at the VA.  Following the action, 115,000 staffers will have two months to get inoculated against the coronavirus, and face being fired if they do not oblige. Read More

Despite widespread protests, France’s parliament Monday passed a controversial law requiring special “health passes” for people that choose to dine in at restaurants or travel domestically, in addition to mandating universal vaccinations for healthcare and other essential workers, as the country attempts to combat a surge in coronavirus infections

Inflation Could Prompt Largest Social Security Cost-Of-Living Adjustment In Decades. Why There’s A Push To Change The Way It’s Calculated

The Social Security cost-of-living adjustment for 2022 could be 6.1% due to inflation, according to a new estimate. That would be the biggest increase since 1983, according to non-partisan advocacy group The Senior Citizens League, which calculated the figure. It’s also a bump up from last month’s estimate, when the increase for next year was expected to be 5.3%.The new estimate comes as the Consumer Price Index in June increased 5.4% from a year earlier, the largest gain since August 2008. Higher food and energy prices were among the culprits that helped push the inflation measure higher. Read More

Gov. Gavin Newsom is expected to announce that state employees will be required to get COVID tests if they don't provide proof of vaccination.

FEMA And FCC Plan Nationwide Emergency Alert Test For Aug. 11 Test Messages Will Be Sent To TVs And Radios Along With Select Cell Phones That Have Opted-In To Receive Test Messages

WASHINGTON – FEMA, in coordination with the Federal Communications Commission, will conduct a nationwide test of the Emergency Alert System (EAS) and Wireless Emergency Alerts (WEA) this summer.

The national test will consist of two portions, testing WEA and EAS capabilities. Both tests will begin at 2:20 p.m. ET on Wednesday, Aug. 11. The Wireless Emergency Alert portion of the test will be directed only to consumer cell phones where the subscriber has opted-in to receive test messages. This will be the second nationwide WEA test, but the first nationwide WEA test on a consumer opt-in basis. The test message will display in either English or in Spanish, depending on the language settings of the wireless handset. Read More

The National Defense Authorization Act (NDAA) approved by the committee behind closed doors Wednesday “amends the Military Selective Service Act to require the registration of women for Selective Service,” according to a summary released Thursday. The United States has not instituted a draft since the Vietnam War, and Pentagon officials have repeatedly said they intend to keep the force all-volunteer.

But men ages 18 through 25 still have to register with what’s officially known as the Selective Service System or face consequences such as losing access to federal financial aid for college. Congress has been debating whether to expand the registration requirement to women since all combat jobs were opened to female service members in 2016.         Read More

US To Maintain Travel Restrictions Due To Delta Variant

The University of Alabama announced Friday that students with at least one dose of a COVID-19 vaccine will receive a $20 reward in Bama Cash, a campus currency option.

The reward is part of the university’s “Protect Our Herd” initiative, giving the university information about necessary vaccine quantities and allowing them to plan for the possibility of campus-wide herd immunity.

“By rolling up your sleeve, you’ve helped Protect Our Herd, and this is our way of saying thank you!” the announcement says. Read More

Hyderabad-based Biological E Limited, which is developing a made-in-India vaccine against the coronavirus disease (Covid-19), is expected to launch the vaccine, Corbevax, by September-end, news agency ANI reported on Monday quoting sources. The vaccine, which is currently undergoing phase 3 clinical trials, is based on the RBD protein sub-unit platform. Biological E is expected to apply for its emergency use authorisation (EUA) by the end of next month and will provide 300 million doses of to the Union government by December 2021, as announced by the Union ministry of health and family welfare (MoHFW) in June. "The Union ministry of health would be making an advance payment of ₹1500 crore to Biological E," a statement by the ministry had said. Read More

Mayor Bill de Blasio expanded New York City's vaccine mandate to include all city workers on Monday. Starting this fall, employees who have not provided proof of COVID-19 vaccination must test weekly for the virus. Unvaccinated workers will have until Sept. 13 to complete their vaccine series or opt for a virus test each week. But before that deadline kicks in, the mayor said unvaccinated workers must wear a mask at work starting Aug. 2. The new vaccine mandate begins with city employees who work in congregate settings. That group, roughly 45,000 workers, will have to start testing weekly if they have not received their dose of the vaccine by Aug. 16.

OMAHA, Neb. -- Several states scaled back their reporting of COVID-19 statistics this month just as cases across the country started to skyrocket, depriving the public of real-time information on outbreaks, cases, hospitalizations and deaths in their communities.

The shift to weekly instead of daily reporting in Nebraska, Iowa and South Dakota marked a notable shift during a pandemic in which coronavirus dashboards have become a staple for Americans closely tracking case counts and trends to navigate a crisis that has killed more than 600,000 people in the U.S. Read More

Biden Admin Says 'Long COVID-19' Could Qualify As A Disability

The Biden administration on Monday released new guidance on how to support those experiencing long-term symptoms of COVID-19 as part of a broader effort to recognize the 31st anniversary of the Americans with Disabilities Act.

The departments of Health and Human Services (HHS) and Justice rolled out guidance making clear that symptoms of “long COVID-19” could qualify as a disability under the federal civil rights law.

The guidance makes clear that long COVID-19 is not automatically a disability and that an “individualized assessment” is necessary to determine whether a person’s long-term symptoms or condition “substantially limits a major life activity.”  Read More

Hundreds of protesters rallied in the Tunisian capital and other cities, demanding that the government step down after a spike in COVID-19 cases aggravated economic troubles.

A lagoon in Argentina's southern Patagonia region has turned bright pink in a striking, but frightful phenomenon experts and activists blame on pollution by a chemical used to preserve prawns for export.

The color is caused by sodium sulfite, an anti-bacterial product used in fish factories, whose waste is blamed for contaminating the Chubut river that feeds the Corfo lagoon and other water sources in the region, according to activists.

Residents have long complained of foul smells and other environmental issues around the river and lagoon.

"Those who should be in control are the ones who authorize the poisoning of people," environmental activist Pablo Lada told AFP, blaming the government for the mess. Read More

An 'unusually large meteor' briefly lit up southern Norway on Sunday, creating a spectacular sound and light display as it rumbled across the sky.  The meteor flew over Oslo at around 01:00, with the phenomena seen as far north as Trondheim. Experts believe that a piece of the meteor may have hit Earth, possibly not far from the capital. Thankfully, there have been no reports of injuries. Read More

American Airlines Warns About Fuel Shortages Around The Country, Asks Pilots To Conserve

American Airlines on Monday said it might have to add stops to certain flights because of fuel delivery delays at some midsize airports and asked pilots to conserve when possible, the latest headache during a surge in summer travel.

The carrier said airlines, including American, have experienced the supply shortages due to a lack of truck drivers, trucks and fuel supply.

“American Airlines station jet fuel delivery delays initially affected mostly western U.S. cities, but are now being reported at American stations across the country. Delivery delays are expected to continue through mid-August,” according to a company memo, which was reviewed by CNBC. Read More

Monster flash flood intercepted with the flash flood guru David Rankin in New River, AZ just north of Phoenix! Monsoon insanity continues across Arizona and New Mexico with historic rainfall. Another major wave of heavy rain and storms is on the way for tomorrow. These flash floods have an incredible distinctive smell!

‘Holy Moly!’: Inside Texas’ Fight Against A Ransomware Hack

DALLAS (AP) — It was a steamy Friday two Augusts ago when Jason Whisler settled in for a working breakfast at the Coffee Ranch restaurant in the Texas Panhandle city of Borger. The most pressing agenda item for city officials like him that morning: planning for a country concert and anniversary event.

Then Whisler’s phone rang. Borger’s computer system had been hacked.

In 2019, ransomware had yet to emerge as one of the top challenges confronting the United States. But the attacks in Texas were a harbinger of the now-exploding threat and offer a case study in what happens behind the scenes when victims come under attack. Read More

Millions of renters across the country face eviction as a federal moratorium set to expire at the end of July is unlikely to be extended.-