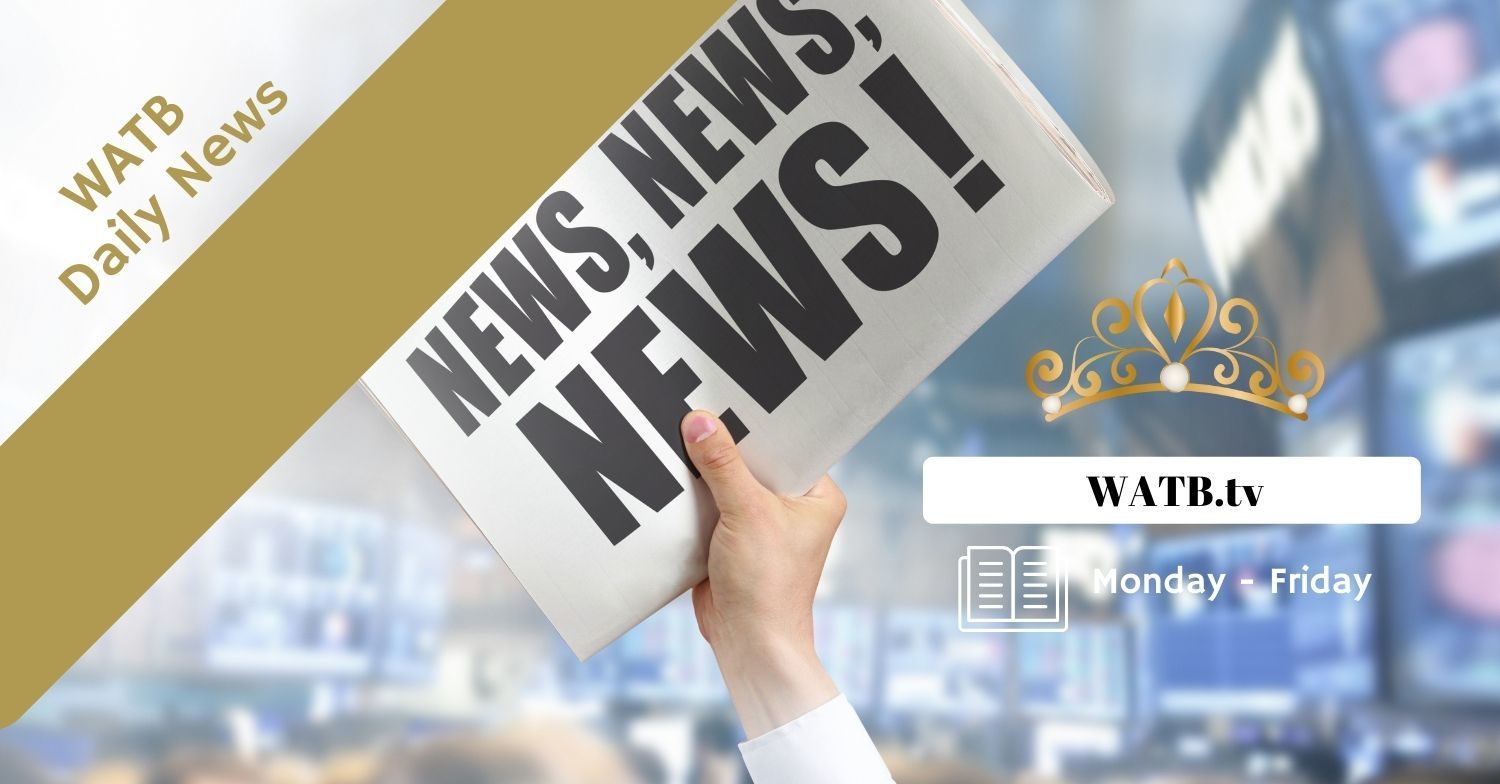 * White House Delivers Strong Warning To Those Who Are Unvaccinated

* Tyndall Technology Expo Shows Off "Base Of Future" Capabilities

* It's Not An Either/Or: Fauci Suggests Masks Are Forever, Vaccinated Or Unvaccinated

Health officials are warning the highly contagious omicron variant will soon become the dominant strain in the U.S. and fuel another surge of COVID-19 infections and deaths over the coming weeks. The CDC is also recommending against the use of the Johnson and Johnson vaccine unless the Pfizer and Moderna options are unavailable. NBC’s Miguel Almaguer reports for TODAY.

As the omicron variant of the coronavirus is poised to become the new leading variant in the United States, many schools and businesses are closing their doors over what President Biden is predicting to be a winter of "severe illness and death."

Across the country, schools are beginning to shift to remote learning, restaurants are closing their doors to the public, and events are once again being canceled as a result of the new omicron variant of the coronavirus. Read More

White House Delivers Strong Warning To Those Who Are Unvaccinated

Tyndall Technology Expo Shows Off “Base Of The Future” Capabilities

The plans call for the most modern, technologically advanced base in the world.

Thursday, tech experts were on-base showing airmen the new capabilities that will make up the base of the future.

Part of that is the “digital twin.” Tyndall Air Force Base’s Installation of the Future Science and Technology Advisor, Lance Marrano, said the digital twin will be a virtual model of the entire installation.”

“We were able to model different scenarios and from that, we were able to show if we implement certain technologies if we change the way security forces prepare and respond to protect the installation they can reduce the likelihood of a threat,” Marrano said.

Weather-resistant safe rooms will be built across Bay County

The digital twin will allow people to measure spaces and see how things fit for the specific mission.

The Installation Resilience Operation Center or ‘IROC’ will be the real-life nerve center of the base.

“We could be talking about a particular security incident and being able to coordinate all the different first responders on the installation,” Marrano said. Read More

WASHINGTON (TND) — At the start of the new year, the Biden administration will allow certain eligible health care providers who "create and implement an anti-racism plan" to increase costs associated with their services.

A November memo from the Department of Health and Human Services (HHS) listed updated rules for Medicare's Merit-Based Incentive Payment System (MIPS), which determines the rates at which eligible doctors can be reimbursed for their services. Among those new rules is an update to the MIPS aimed at incentivizing health care providers “to acknowledge systemic racism as a root cause for differences in health outcomes between socially-defined racial groups,” according to the HHS update.

At the start of the new year, the Biden administration will allow certain eligible health care providers who "create and implement an anti-racism plan" to increase costs associated with their services.https://t.co/QTaM2GOrIb

‘It’s Not An Either/Or’: Fauci Suggests Masks Are Forever, Vaccinated Or Unvaccinated

Dr. Anthony Fauci said Sunday that he did not believe face masks were going away any time soon, saying that they continued to be an important tool in preventing the spread of coronavirus and should be used regardless of vaccination status.

Fauci made appearances on several of the Sunday morning shows and told ABC’s Jonathan Karl that people should continued to wear masks in conjunction with the vaccines and boosters rather than in place of them.

Karl began by asking Fauci to clarify comments he had made earlier, namely that those who were vaccinated against COVID-19 should “feel comfortable” gathering with family and even traveling over the Christmas holiday this week.

“You said earlier this week that if you are vaccinated, you should feel comfortable traveling and celebrating the holidays with your family. Do you still believe that?” Karl asked.

“No, I do. If you are vaccinated and boosted, and are prudent when you travel, when you are in an airport, to be wearing a mask all the time, you have to be wearing a mask on a plane,” Fauci said, adding, “Do not do things like go to gatherings where there are people who you do not know what their vaccination status is.” Read More

Creating believable real-time digital humans is incredibly challenging and time-consuming. What if we could make the process radically simpler, faster, and more scalable—without compromising on quality?

You are on the PRO Robotics channel and today we present to you the top of the best robots 2021. Tesla bot, Boston Dynamics robots, realistic robot arms, iron man suits, the cutest robot and more await you in this issue. Every year more and more novelties surprise the world with their latest technology, about which you will be the first to know. Watch the video until the end and write in the comments, which robot surprised you more than others?

Senators Elizabeth Warren and Cory Booker have tested positive for COVID-19 in breakthrough cases, they each announced on Twitter Sunday.

"I regularly test for COVID & while I tested negative earlier this week, today I tested positive with a breakthrough case. Thankfully, I am only experiencing mild symptoms & am grateful for the protection provided against serious illness that comes from being vaccinated & boosted," Warren wrote.

Booker tweeted: "I learned today that I tested positive for COVID-19 after first feeling symptoms on Saturday. My symptoms are relatively mild. I’m beyond grateful to have received two doses of vaccine and, more recently, a booster – I’m certain that without them I would be doing much worse."

The senators from Massachusetts and New Jersey have both been vocal proponents of the COVID-19 vaccine in Washington. Warren lost her older brother to the virus in May 2020.  Read More

Sarah Palin has said “over my dead body” will she allow authorities force her to get a Covid-19 vaccine.

The Republican firebrand made the remarks at “Americafest”, a three-day event in Phoenix, Arizona organized by Turning Point USA, a youth conservative student movement for “freedom, free markets and limited...  Read More

New York City Mayor Bill de Blasio said Sunday that the city would be ramping up testing amid the surge in COVID-19 cases and fears over the fast-spreading Omicron variant. Watch his press conference here.

“Insinuating that Israel or the Jews control Congress or the media is antisemitic, plain and simple,” Jonathan Greenblatt, the chief executive of the Anti-Defamation League, wrote on Twitter Friday.

Trump’s comments from an interview in July with Israeli journalist Barak Ravid, were broadcast Thursday on the Unholy Podcast, hosted by Yonit Levi of Israel’s Channel 12 news and Jonathan Freedland of The Guardian.

In his remarks, the former US president returned to his frequently made accusations that American Jews are ungrateful for all he has done for Israel. “There are people in this country that are Jewish — no longer love Israel. I’ll tell you, the evangelical Christians love Israel more than Jews in this country,” Trump said.

“It used to be that Israel had absolute power over Congress. And today, I think it’s the exact opposite. And I think Obama and Biden did that,” Trump continued. Read More

London (CNN)The Netherlands entered a strict new lockdown Sunday due to fears over the Omicron coronavirus variant, and the UK's health minister wouldn't rule out further restrictions, as Europe braces for a surge in Covid-19 infections over the usually busy festive period.

Indoor gatherings in the Netherlands will now be limited to a maximum of two guests per household until at least mid-January, Prime Minister Mark Rutte announced Saturday. That number is extended slightly around Christmas and New Year's Eve to four guests.
Non-essential shops, hospitality venues and cultural institutions will also be closed, while schools will remain shut until at least January 9.
In a televised address, Rutte said the lockdown was "unavoidable because of the fifth wave that is coming at us with the Omicron variant," Reuters reported. Read More

LOUISVILLE, Ky. (WDRB) – The first case of the omicron variant has been confirmed in the state of Indiana.

The variant was found through the Indiana Department of Health "variant surveillance program," according to a news release.

State health department officials collected the sample on Dec. 9, and the omicron variant was detected in it this weekend through further testing.

The health department is not releasing where the variant was found in Indiana because of "privacy laws."

The patient, who health officials say was notified, has not been vaccinated against COVID-19. They did not reveal the patient's symptoms.

According to the CDC, those who are fully vaccinated and have received a booster dose are "best protected" against the variant.

“COVID-19 cases are on the rise across Indiana, and we do not want this variant to increase the burden on our already stressed healthcare system,” she said.

On Thursday, 5,180 Hoosiers tested positive for COVID-19. Indiana is averaging about 40 COVID deaths per day this month and hospitalizations with the illness have topped 3,000 people for the first time in nearly a year amid the state’s ongoing infection surge, according to tracking by the state health department.  Read More

Security will be ramped up at many schools across the country today following reports of warnings in TikTok videos. Educators and law enforcement officials say they haven’t seen credible threats but would increase their presence around schools "out of an abundance of caution."