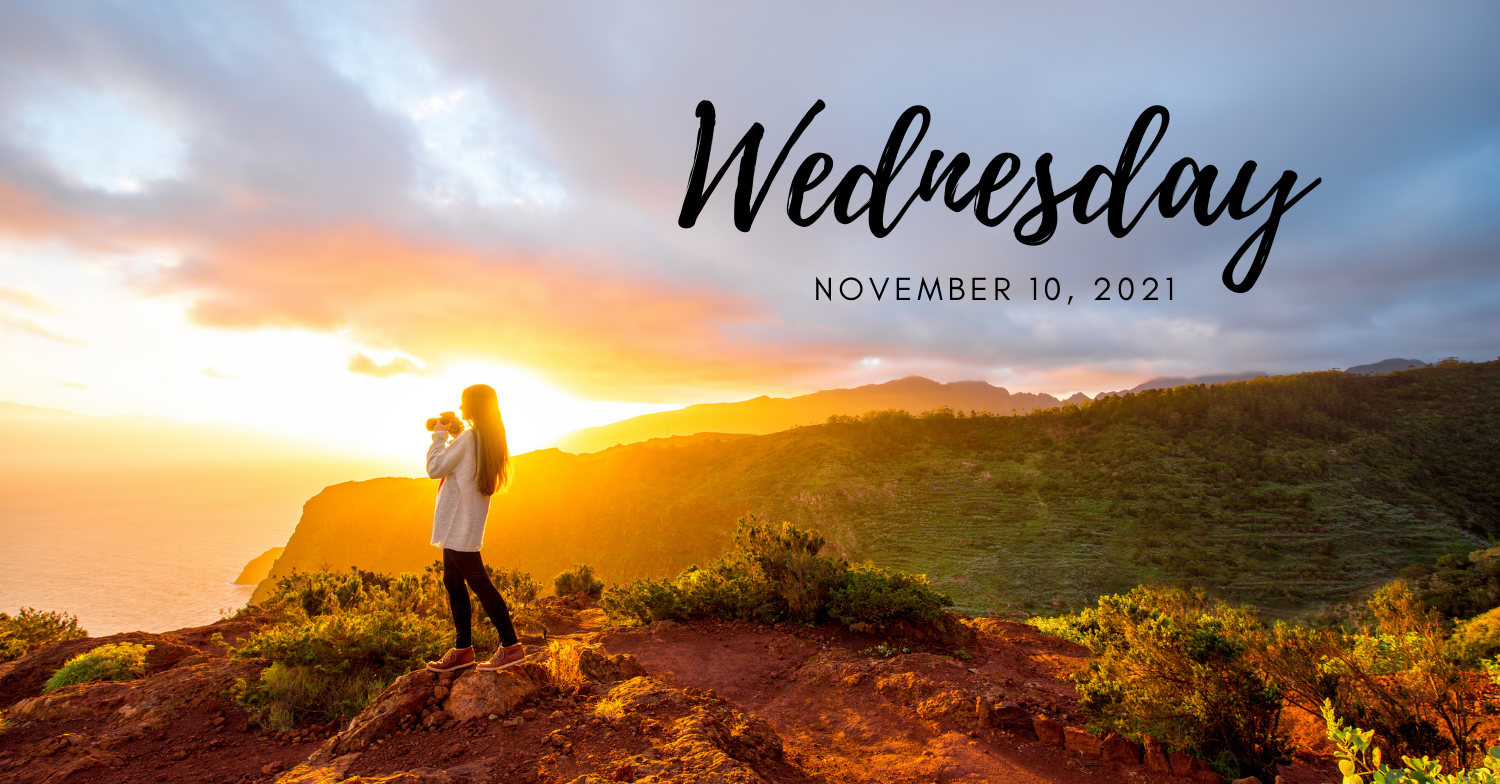 * President Biden On Supply Chains And The Holidays

* What's The Difference Between 1.5c And 2c of Global Warming?

* Texas A&M Student Has No Brain Activity After Being Injured During Astroworld Festival, Family Says

* GE Is Splitting Into Three Companies

President Biden On Supply Chains And the Holidays

"I know folks are concerned about getting what they need for the upcoming holidays. That’s why I spent the afternoon on the phone with the CEOs of America’s largest retailers. Here’s what we talked about."

The Biden administration is reportedly weighing the potential market consequences of shutting down an oil pipeline in Michigan, drawing criticism from opponents. Former Michigan Gov. Jennifer Granholm, Biden's energy secretary, predicted Sunday that heating prices will rise this winter regardless of the Biden administration's decision on the pipeline. "Yeah, this is going to happen. It will be more expensive this year than last year," Granholm told CNN.

The administration has yet to decide on what to do with Line 5 and officials were gathering information only to present a clear picture of the situation, according to sources who spoke to Politico.

Line 5 is part of a network that moves crude oil and other petroleum products from western Canada, transporting about 540,000 barrels per day. Petroleum is taken from the pipeline in Escanaba, Michigan. Read More

Seattle Public Schools says that classes are canceled for this Friday due to a shortage of teachers.

In a letter sent to parents, SPS said there will be no in-person or remote instruction on November 11 or 12 as part of its effort to "ensure the highest quality environment for student learning."

Schools were already scheduled to be closed on Thursday due to Veteran’s Day.

The district told Fox News that, as of last week, more than 600 educators had requested a substitute and additional requests came in this week. It said teachers and staff have historically requested off the day after Veterans Day but because of current circumstances, the district does not have the capacity to "ensure student safety and high-quality learning."  Read More

What's The Difference Between 1.5°C And 2°C Of Global Warming?

World leaders and scientists have stressed the need to limit global warming to 1.5 degrees Celsius. The 2015 Paris Agreement commits countries to limit the global average temperature rise to well below 2°C above pre-industrial levels, and to aim for 1.5°C. But what is the difference between 1.5°C and 2°C of warming?

WASHINGTON—Amazon.com is seeking approval from U.S. communications regulators to deploy more than 4,500 additional satellites as part of the company’s effort to deliver broadband internet to areas around the world that lack high-speed service.

Amazon had said previously it planned to spend at least $10 billion to build 3,236 such satellites through its Project Kuiper program. Late on Thursday it asked the Federal Communications Commission (FCC) for approval to deploy a total of 7,774 satellites for the project.

On Monday, Amazon asked the FCC for approval to launch and operate two prototype satellites by the end of 2022.

Amazon said in its filing the satellites “will serve households, hospitals, businesses, government agencies, and other organizations around the world, including in geographic areas where reliable broadband remains lacking.”

“Although connectivity has improved on a global basis, only 51 percent of the global population, and 44 percent of the population of developing countries, are online,” the company filing said. Read More

Paris (CNN)When President Barack Obama's decision to scrap a planned missile defense system in the fall of 2009 left a pair of European allies feeling jilted, Vice President Joe Biden embarked on a three-day tour to coax relations back to health.

Twelve years later, Biden -- now the US President responsible for vexing another European ally -- is entrusting his vice president with a similar mission.
Arriving in Paris on Tuesday, Vice President Kamala Harris is setting off on a five-day effort to revitalize the French-American relationship less than two months after the longest American allies were blindsided by Biden's decision to help Australia develop nuclear submarines -- sinking France's own submarine deal with Australia in the process. The visit will also be Harris' first to Europe in her new role, a key diplomatic test for the vice president and an opportunity to burnish her foreign policy credentials after a rocky first foreign trip earlier this year.
Harris' trip to Paris comes on the heels of Biden's meeting with French President Emmanuel Macron on the sidelines of the G-20 conference in Rome, during which Biden acknowledged "clumsy" handling of the submarine affair. But while French officials have been heartened by the US rhetoric in recent weeks -- including on Macron's priority of bolstering European defenses -- French officials say they are still looking for concrete US actions to make amends. Read More
*******************************************************************

Texas A&M Student Has No Brain Activity After Being Injured During Astroworld Festival, Family Says

HOUSTON, Texas (KTRK) -- A 22-year old Texas A&M University senior has shown no brain activity after she was injured during Friday's disaster at the Astroworld Festival, her family said Tuesday.

Bharti Shahani has been in critical condition and is on a ventilator. Her family told ABC13 Tuesday morning that they are meeting to determine what to do next.

Shahani, her sister Namrata Shahani and her cousin Mohit Bellani went to the concert together, but lost each other when the crowd surged.

"Once one person fell, people started toppling like dominos. It was like a sinkhole. People were falling on top of each other," Bellani said. "There were like layers of bodies on the ground, like two people thick. We were fighting to come up to the top and breathe to stay alive."

Bharti was taken to Houston Methodist Hospital by ambulance. Paramedics gave her CPR on the way there.

But Namrata Shahani and Bellani had both lost their cell phones. They couldn't find Bharti.

"Once we let go of her hand, the next time we saw her, we were in the ER," Namrata said.

Bharti and Namrata's parents went to NRG Park when they heard the news. They then rushed to multiple hospitals before they found Bharti.

"They took us to her room, and she was bleeding and on a ventilator. Me and my wife were too shocked. We can't even stand in there," her father, Sunny Shahani, said Read More

Poland's Prime Minister has accused Russian President Vladimir Putin of being behind a migrant crisis at Belarus's border with Poland.

Mateusz Morawiecki said that Belarus's authoritarian leader, a close ally of Mr Putin, is orchestrating the crisis, but "it has its mastermind in Moscow".

At least 2,000 migrants are stuck at the border in freezing conditions.

Belarus's leader Alexander Lukashenko denies claims it is sending people over the border in revenge for EU sanctions.

Video footage shows crowds of people on the Belarusian side of a barbed-wire border fence with Poland. Some try to force their way through using bolt cutters, tree trunks and group force, while Polish guards fend them off with what appears to be tear gas.

Many of the migrants are young men but there are also women and children, mostly from the Middle East and Asia. They are camping in tents just inside Belarus, trapped between Polish guards on one side, and Belarusian guards on the other. Read More

Countries' latest pledges to cut their greenhouse gas emissions are still not enough to avoid the most devastating consequences of a changing climate, according to a new analysis.

What's more, the report by Climate Action Tracker finds that of the many pledges to zero out climate emissions, only four have concrete plans to achieve that. They are by Chile, Costa Rica, the European Union and the U.K.

It's the latest assessment to cast doubt on the meeting's rallying cry to "keep 1.5 alive." That refers to the target in the Paris climate agreement to limit global warming to 1.5 degrees Celsius (2.7 degrees Fahrenheit).

The Climate Action Tracker report shows that under the most optimistic scenario, if countries fulfill all the promises they've made so far, warming would be about 1.8 degrees Celsius. That's similar to a new U.N. assessment and an International Energy Agency analysis last week. Read More

We are afraid that people are not going to be able to keep their homes warm this winter - that is the warning flashing across the mainstream and local media reports as energy markets continue to struggle to keep up with demand and as consumers have the hardest time of their lives paying inflated prices for home heat and vehicle expense. It is already being reported that consumers are struggling with the fastest price increase in decades – now, we can expect a crunch in the energy market warns one distribution outlet. when these prices start to move through to the consumer – the American people are going to lose it! New reports show that Producer prices have continued their skyward rise to 8.6%, matching a September record high according to the reports, Inflation at the wholesale level has shot up 8.6% last month from a year earlier, matching September’s record annual gain and proving without a shadow of a doubt that inflationary pressures are increasing, they are not temporary, and they are not easing.

GE Is Splitting Into Three Companies

GE will become separate, publicly traded companies for its aviation, healthcare and energy businesses. The company said it hopes to spin off the healthcare business to shareholders in early 2023 and that the separation of its renewable energy and power business will occur in early 2024.
Shares of GE (GE) surged as much as 17% in premarket trading on the news before retreating to about a 6% gain in early trading after the open. The stock was already up more than 25% in 2021 before the spin-off announcement.
"By creating three industry-leading, global public companies, each can benefit from greater focus, tailored capital allocation, and strategic flexibility to drive long-term growth and value for customers, investors and employees," said CEO Larry Culp in a press release. Read More
*******************************************************************

Rivian Automotive, the electric vehicle maker backed by Amazon and Ford, priced its IPO on Tuesday at $78 a share. The deal values Rivian at $66.5 billion.

Should underwriters exercise their full purchase option, the company will have a market cap of over $68 billion. The stock will trade on the Nasdaq under ticker symbol RIVN.

Rivian said it expects the IPO to bring in $11.9 billion.

Last week, Rivian increased the expected price range to between $72 and $74 from a previous range of $57 to $62. At its $78 offer price, Rivian is already worth almost as much as Ford ($79 billion) and General Motors ($85 billion). That’s all before the company has even started generating real revenue.

Rivian said in its prospectus that it will lose up to $1.28 billion in the third quarter, while revenue will range from zero to $1 million. It’s the latest EV company to attract hefty investor capital at a stratospheric price without yet proving that it has a sustainable business model. Read More