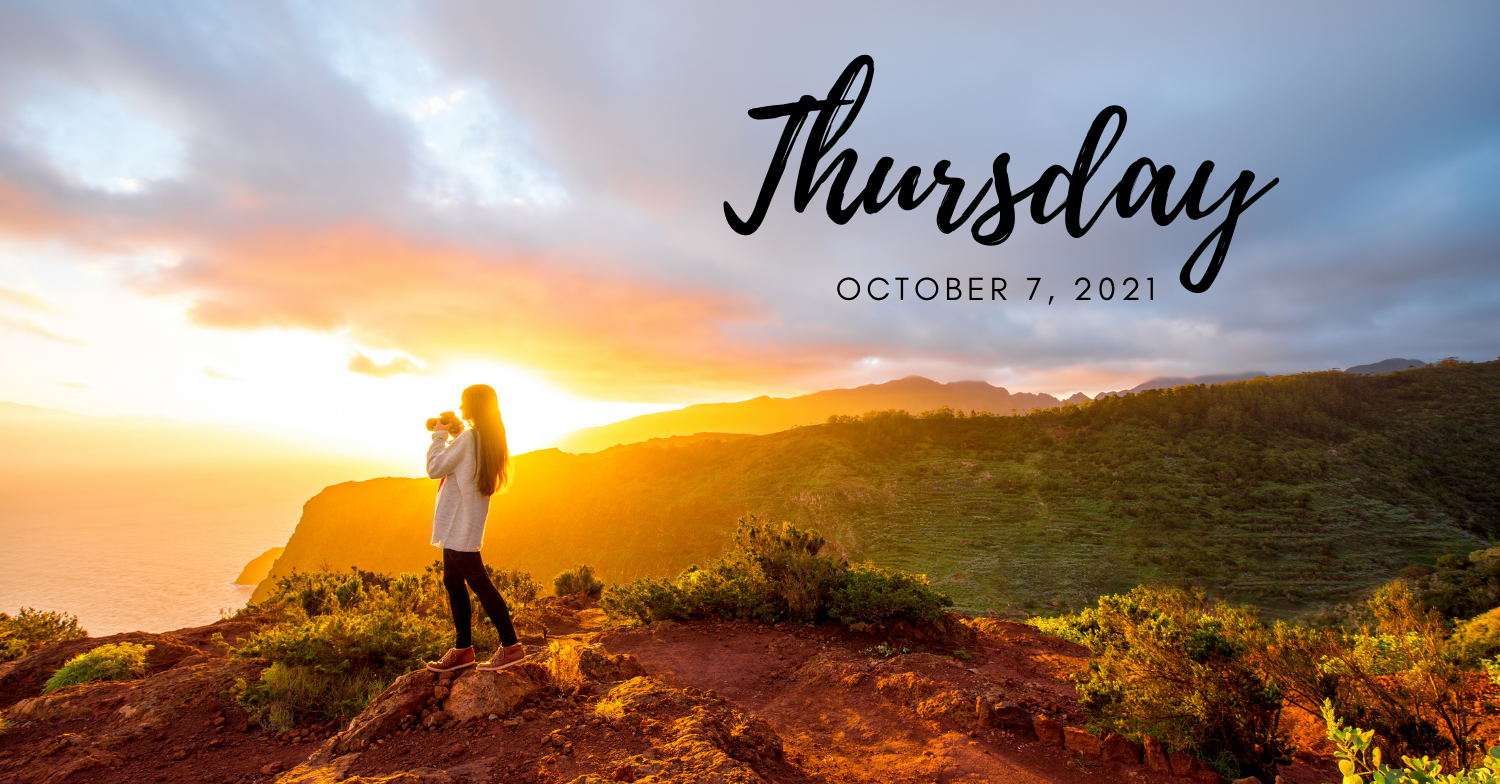 * Oil Prices Could Hit An 'Off The Charts Spike,' Says Strategist

* WHO Endorses Use Of First Ever Malaria Vaccine For Children

* Biden Meets With CEO's To Discuss The Debt Limit

* WEF: Climate Change, How Can We Prepare U.S. Home For Extreme Weather?

* City Of Toronto Staff Facing 6 Week Suspension, Lay Off If Not Fully Vaxxed

Sinan Aral, David Austin Professor of Management at the MIT Sloan School of Management and MIT Initiative on Digital Economy, joins Yahoo Finance's Seana Smith and Adam Shapiro to discuss how Facebook and social media networks should be regulated. Don't Miss: Valley of Hype: The Culture That Built Elizabeth Holmes

'Planetary Defense!' NASA Will Launch November Mission To Deflect 'Devastating' Asteroid From Hitting Earth By NUDGING It With A Spacecraft, Agency Says

NASA said on Monday that its mission to deflect an asteroid in deep space using a spacecraft is targeting a late November launch.

Known as the Double Asteroid Redirection Test (DART) mission, the U.S. space agency will send the DART spacecraft to a pair of asteroids - the Didymos binary - at 1:20 a.m. EST on November 24 aboard a SpaceX Falcon 9 rocket from Vandenberg Space Force Base in California.

DART will smash in one of the two asteroids, known as Didymoon, at roughly 13,500mph on October 2, 2022. In doing so, it will change the speed of Didymoon a fraction of a percent, but it will be enough so NASA can measure its altered orbit.

This will provide valuable input into future missions to deflect asteroids.

At roughly 160 meters (524ft) wide, Didymoon orbits a much larger space rock known as Didymos that is approximately 780 meters (2,559ft) across. Didymoon came relatively close to Earth in 2003, coming within 3.7 million miles.

In 2012, Oliver Scott Curry was an anthropology lecturer at the University of Oxford. One day, he organized a debate among his students about whether morality was innate or acquired. One side argued passionately that morality was the same everywhere; the other, that morals were different everywhere.

“I realized that, obviously, no one really knew, and so decided to find out for myself,” Curry says.

Seven years later, Curry, now a senior researcher at Oxford’s Institute for Cognitive and Evolutionary Anthropology, can offer up an answer to the seemingly ginormous question of what morality is and how it does—or doesn’t—vary around the world.

Morality, he says, is meant to promote cooperation. “People everywhere face a similar set of social problems, and use a similar set of moral rules to solve them,” he says as lead author of a paper recently published in Current Anthropology. “Everyone everywhere shares a common moral code. All agree that cooperating, promoting the common good, is the right thing to do.” Read More

Oct.06 -- Dr. Anthony Fauci, chief medical adviser to U.S. President Joe Biden, says he can't predict when or if a Covid-19 vaccine for children will be approved. He also comments on Merck's Covid pill and the possibility of being able to mix and match booster shots.

Oil Prices Could Hit An ‘Off The Charts Spike,’ Says Strategist

Oil prices could experience an “off the charts spike” as winter approaches and OPEC and its allies stick to their earlier pact on oil output, a strategist told CNBC.

OPEC+ — the Organization of the Petroleum Exporting Countries, with their allies including Russia — have been under pressure from top consumers, such as the United States and India, to add extra supplies after oil prices surged 50% this year.

However, the oil cartel agreed on Monday to stick to an existing pact to hike oil output by 400,000 barrels per day (bpd) in November, shrugging off calls to pump more oil.

John Driscoll, chief strategist at JTD Energy Services, said the decision by OPEC+ was a “very prudent course of action” until one considers the ongoing energy crises and possible supply disruptions.

“What I think [is] more concerning to everyone out there … what happens during the winter? Are we going to have another Arctic freeze?” Driscoll told CNBC’s “Squawk Box Asia” on Tuesday.

He pointed to the shortage of fuel in the U.K. — with long queues of cars waiting to buy gas, as well as “fist fights.” In the U.K., people have been panic buying fuel, causing shortages, as well as straining the fuel supply chains.            Read More

HAWAIʻI ISLAND - On Tuesday evening, a Magnitude 4.6 earthquake shook the Big Island, but there was no observable impact on Kīlauea volcano.

The British prime minister has dismissed talk of a cost-of-living crisis in the United Kingdom and ended his party's annual conference with a rousing speech of optimism and opportunity. Boris Johnson promised to end what he described as a "broken" model of low wages and growth. But his speech came on the same day that millions of low earners are having their social benefits cut.

WHO Endorses Use Of First Ever Malaria Vaccine For Children

The World Health Organisation on Wednesday endorsed the RTS,S/AS01 malaria vaccine for children, the first against the mosquito-borne disease that kills more than 400 000 a year.

The decision followed a review of a pilot programme deployed since 2019 in Ghana, Kenya and Malawi where more than two million doses were given of the vaccine, first made by the pharmaceutical company GSK in 1987.

The WHO said in a statement it was recommending the widespread application of the vaccine among children in sub-Saharan Africa and in other regions with moderate to high malaria transmission.

"From a scientific perspective this is a massive breakthrough," said Pedro Alonso, Director of the WHO Global Malaria Programme. Read More

Biden Meets With CEOs To Discuss The Debt Limit

WEF Climate Change: How Can We Prepare U.S. Homes For Extreme Weather?

Powerful storms, wildfires, heat waves and other extreme climate-related events are projected to become more common and affect more people. According to a recent Washington Post analysis, nearly a third of Americans live in a county that was struck by a weather disaster this past summer, and around two-thirds live in places that experienced a multiday heat wave. In an April Pew Research Center survey, half of Americans said their area had experienced extreme weather over the past year.

Human-caused climate change will make extreme weather events more frequent and more damaging in the coming decades, according to the latest report from the United Nations Intergovernmental Panel on Climate Change. While the nations of the world struggle to agree on how to address the root causes of climate change, there are various ways people can prepare to deal with the immediate effects on a household level.

This analysis examines the prevalence of four specific tools to endure extreme weather in the United States: flood insurance, air conditioning, portable generators and home insulation. (As we’ll see, some of these tools may have their own climate impacts.) Read More

Coles will end its in-store butcher service on Sunday, redeploying or making redundant dozens of butchers and meat workers nationally.

In June, the supermarket giant confirmed it was in talks with its meat department workers over a proposal to only offer pre-packaged meat in store.

A Coles spokesperson told ABC Radio Brisbane on Wednesday the decision to end in-store butcher services was made in late August, after those discussions.

"In June we let our meat team members know we were considering a proposal to align our meat operating models nationally in our stores, so that we can consistently deliver high quality retail-ready meat for our customers whenever they want to shop," the spokesperson said

The spokesperson said Coles was working with the affected employees to "assess" retraining them for other roles.About 1 per cent of Coles' 120,000-strong workforce are employed in the meat department. Read More

The City Of Toronto is taking a zero tolerance approach when it comes to city staff being vaccinated against COVID-19 and has provided an update on its mandatory vaccine policy.

In a statement, the city says staff who do not provide proof of two doses of a COVID-19 vaccine will be suspended for six weeks without pay, starting Nov. 1. If they provide proof during those six weeks, they will be allowed to return to work.

You are on PRO Robots Channel and in this technology news roundup you will see: immortality technology, artificial muscles for robots, a robot chef printing food on a 3D printer, combat robots and much more high-tech news in one episode! Watch the video to the end and write in the comments, which news surprised you the most?