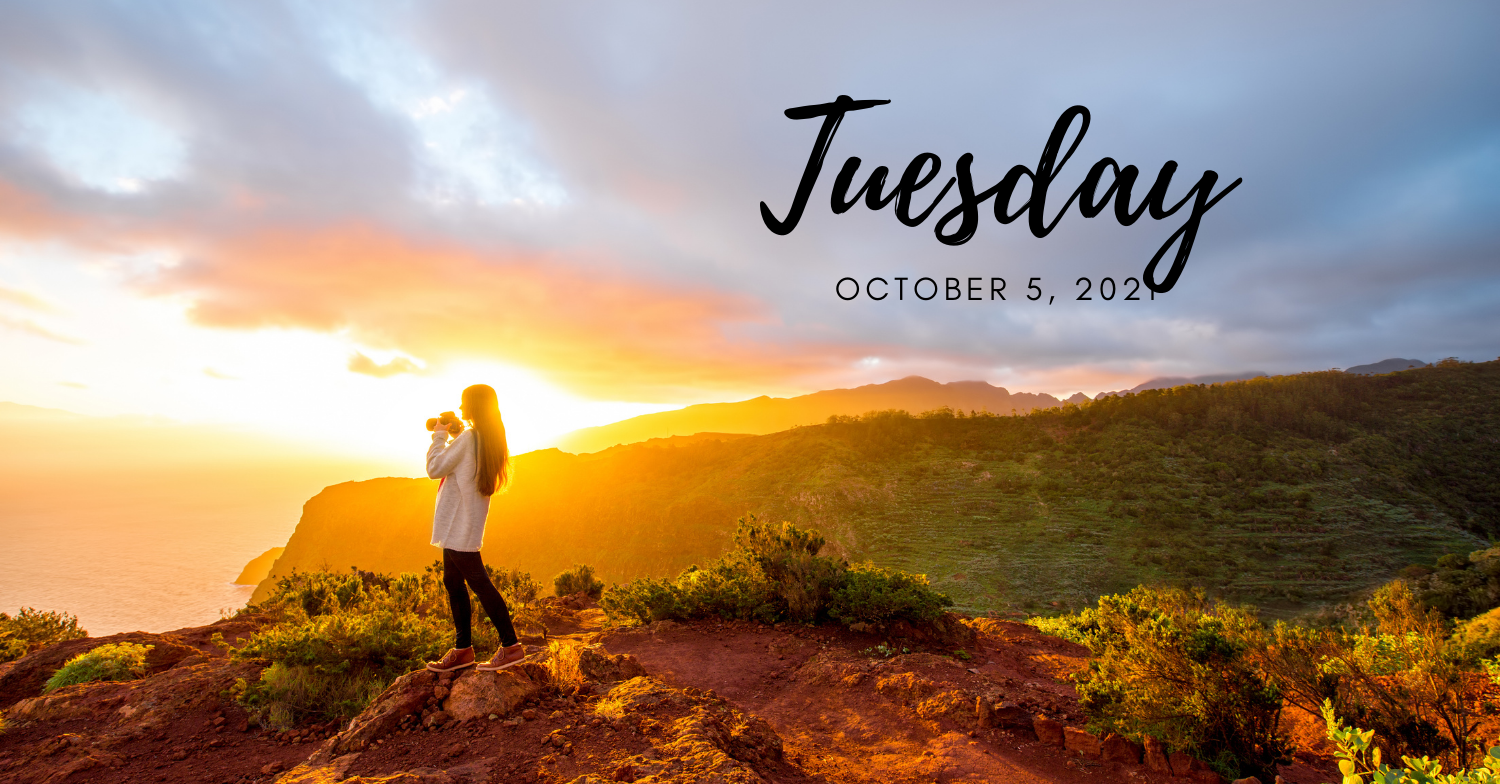 * The Pandora Papers: How The World Of Offshore Finance Is Still Flourishing

More than one million Israelis will lose their Green Pass after a policy change states that a COVID-19 booster shot is required six months after receiving the first two jabs.

VATICAN CITY (CNS) — High-level representatives of the world’s religions came together with Pope Francis at the Vatican to show their joint commitment to caring for the Earth and to appeal to world leaders to deepen their commitments to mitigating climate change.

To the strains of Antonio Vivaldi’s “The Four Seasons” and surrounded by potted greenery and the colorful frescoes of the Hall of Benedictions, nearly 40 faith leaders signed a joint appeal that Pope Francis then blessed and gave to Alok Sharma, president-designate of COP26, and to Luigi Di Maio, Italy’s foreign affairs minister.

“Future generations will never forgive us if we miss the opportunity to protect our common home. We have inherited a garden: We must not leave a desert to our children,” said the written appeal, signed Oct. 4, the feast of St. Francis of Assisi, patron saint of ecology.

The appeal urged world leaders, who will meet at the 26th U.N. Climate Change Conference of Parties — COP26 — in Glasgow Nov. 1-12, “to take speedy, responsible and shared action to safeguard, restore and heal our wounded humanity and the home entrusted to our stewardship.”

Attorney General Merrick Garland on Monday ordered federal law enforcement authorities to huddle with local leaders in the coming weeks to address what the nation’s top prosecutor called a recent “disturbing spike in harassment, intimidation, and threats of violence” against educators and school board members.

The Justice Department will also unveil a series of additional measures in the coming days to “address the rise in criminal conduct directed toward school personnel,” Garland wrote in a memorandum to federal prosecutors and FBI Director Christopher Wray. The department said they're expected to include a training program and a new federal task force stacked with representatives from the department's criminal, civil rights and national security divisions.          Read More

WASHINGTON, Oct 4 (Reuters) - Regardless of whether IMF chief Kristalina Georgieva was to blame for changes to World Bank data in 2017 that benefited China, the scandal has dented the research reputations of both institutions, former staff, government officials and outside experts say.

The damage from the data-rigging scandal that forced the World Bank to discontinue its "Doing Business" investment climate rankings may be difficult to repair and has raised questions over whether the institutions' influential research is subject to shareholder influence.

Georgieva has strongly denied accusations in a World Bank external investigation report that she applied "undue pressure" on staff for changes that boosted China's business climate ranking to 78th from 85th in the 2018 report on business climate rankings at a time when the bank was seeking Beijing's support for a major capital increase.

Army tanker drivers are to start delivering fuel to filling stations in the UK. Many have run dry in a deepening supply crisis. The government insists it has a plan to end shortages of fuel and some foods, but admits it could be months before things get back to normal. Critics say Brexit is causing the chaos. UK Prime Minister Boris Johnson is remaining defiant as he faces a supply chain crisis in the lead up to the Christmas season. In an address to party faithful he said he has a bold plan for a post-COVID recovery. But labor shortages across the UK are bringing logistics to a standstill, and leaving supermarket shelves empty. The army is to be deployed to shore up fuel supplies, after days of panic buying at the pumps. Hauler David Zacchea points to all the trucks he's had to take off the road. He can't hire enough drivers to run them. It's part of a wider supply chain crisis gripping the UK. The government says it will offer thousands of temporary visas so that foreign drivers can fill the gap. But business owners say it's like throwing a drop of water on a bonfire. Driver's unions also say conditions on the job are so poor, it makes keeping staff difficult. Business is now concerned that logistics for the Christmas season will suffer. Poultry farmers are experiencing labor shortages as well, saying people's Christmas turkeys are under threat. Prime Minister Boris Johnson is trying to promote a sense of calm, saying it was all part of the plan for post-Brexit Britain. But it's doing little to sooth nerves. Fears of shortages have led to panic buying at petrol stations. Many retailers say fuel levels are critically low.

Facebook, WhatsApp and Instagram have all gone down in a major outage overnight. The three apps – which are all owned by Facebook and run on shared infrastructure – completely stopped working just before 3AM. "We’re aware that some people are having trouble accessing our apps and products," Facebook Communications exec Andy Stone tweeted. "We’re working to get things back to normal as quickly as possible, and we apologize for any inconvenience."

Facebook whistleblower Frances Haugen is set to give highly anticipated testimony to a Senate panel on Tuesday that the Silicon Valley giant ignored internal warnings about misinformation and dangerous content.

Haugen, a former Facebook product manager, came public for the first time in a “60 Minutes” interview that aired Sunday night, which expanded on the bombshell series of internal documents she leaked to The Wall Street Journal.

“The choices being made by Facebook’s leadership are a huge problem — for children, for public safety, for democracy — that is why I came forward. And let’s be clear: it doesn’t have to be this way. We are here today because of deliberate choices Facebook has made,” Haugen will say, according to a copy of her testimony reported by The Washington Post. Read More

Facebook, Instagram, and WhatsApp faced a massive outage earlier today that took down all services offered by the company for over 6 hours. Although all of the company’s social networks are back online, that didn’t stop Facebook CEO Mark Zuckerberg from losing more than $6 billion in a matter of hours due to today’s outage.

As reported by Bloomberg, Facebook stocks were down nearly 5% on Monday, and 15% down compared to mid-September. As expected, these numbers also affected Zuckerberg’s worth, which ended the day at $121.6 billion. Zuckerberg has slipped to 5th place in the Bloomberg Billionaires Index, a ranking of the 500 richest people in the world. In 4th place is now Microsoft co-founder Bill Gates with $124 billion net worth.

Users began experiencing issues with Facebook’s services (which includes WhatsApp and Instagram) around 8:40 AM PT. It wasn’t long before all of the company’s social networks went completely offline around the world. Several users went to Twitter and other social networks to complain about the outage, which lasted more than 6 hours. Read More

That's according to Grisham's forthcoming book, "I'll Take Your Questions Now," an early copy of which was obtained by Insider.

Trump's call with Ukrainian President Volodymyr Zelensky, in which he pressured Zelensky to launch bogus political investigations targeting the Bidens ahead of the 2020 election, made up the crux of his first impeachment. The House of Representatives charged him with abuse of power and obstruction of Congress, and accused him of carrying out his pressure campaign while withholding vital military aid to Ukraine and dangling a White House meeting.

Grisham, who served as Trump's press secretary from July 2019 to April 2020, wrote that she first saw a memo summarizing the call on September 24, 2019, when Trump was speaking at the United Nations General Assembly. The White House released the memo, which was not a full transcript of the call, to the public the next day. Read More

The Pandora Papers: How The World Of Offshore Finance Is Still Flourishing

In a major international investigation, Four Corners reveals the secrets of the Pandora Papers.

"It does seem very likely that the court will blow a big hole in abortion rights, if not overturn Roe V. Wade altogether," Williams said on MSNBC on Monday. "This is the case from Mississippi. The Supreme Court has held through the last several decades that states can restrict abortion in the period before viability, which is thought to be about 23 or 24 weeks, but cannot ban it during that period."

Williams was speaking in reference to Mississippi law that would ban all abortion in the state after 15 weeks of pregnancy.

Challengers to Mississippi’s 15-week ban say that it should be invalidated under Roe v. Wade, which recognized a constitutional right to abortion before a fetus is viable, typically around 24 weeks of pregnancy.

Financial secrecy laws in South Dakota have made the state a prime location for foreigners who want to conceal and protect their assets, with tens of millions of dollars tied to people accused of financial crimes and human rights abuses, according to newly public documents.

Financial secrecy laws in South Dakota have made the state a prime location for foreigners who want to conceal and protect their assets.

The former Trump aide Omarosa Manigault Newman said Sunday that if Donald Trump wants to run for president again in 2024 he "needs to come clean to the American people" about his health.

Fresh off her court win against the former president, Manigault Newman told MSNBC's Rev. Al Sharpton that she's concerned about the fact that Trump "hasn't come forward and talked about his health."

She did not give any details of what gave her cause for concern or provide any evidence of a particular reason that Trump, who is 75, should need to worry.

"I don't know if he will even be healthy enough to run in 2024," she said, according to MSNBC. "I think he needs to come clean to the American people about where he is on that before deciding to get into a very stressful and strenuous race for the White House."  Read More