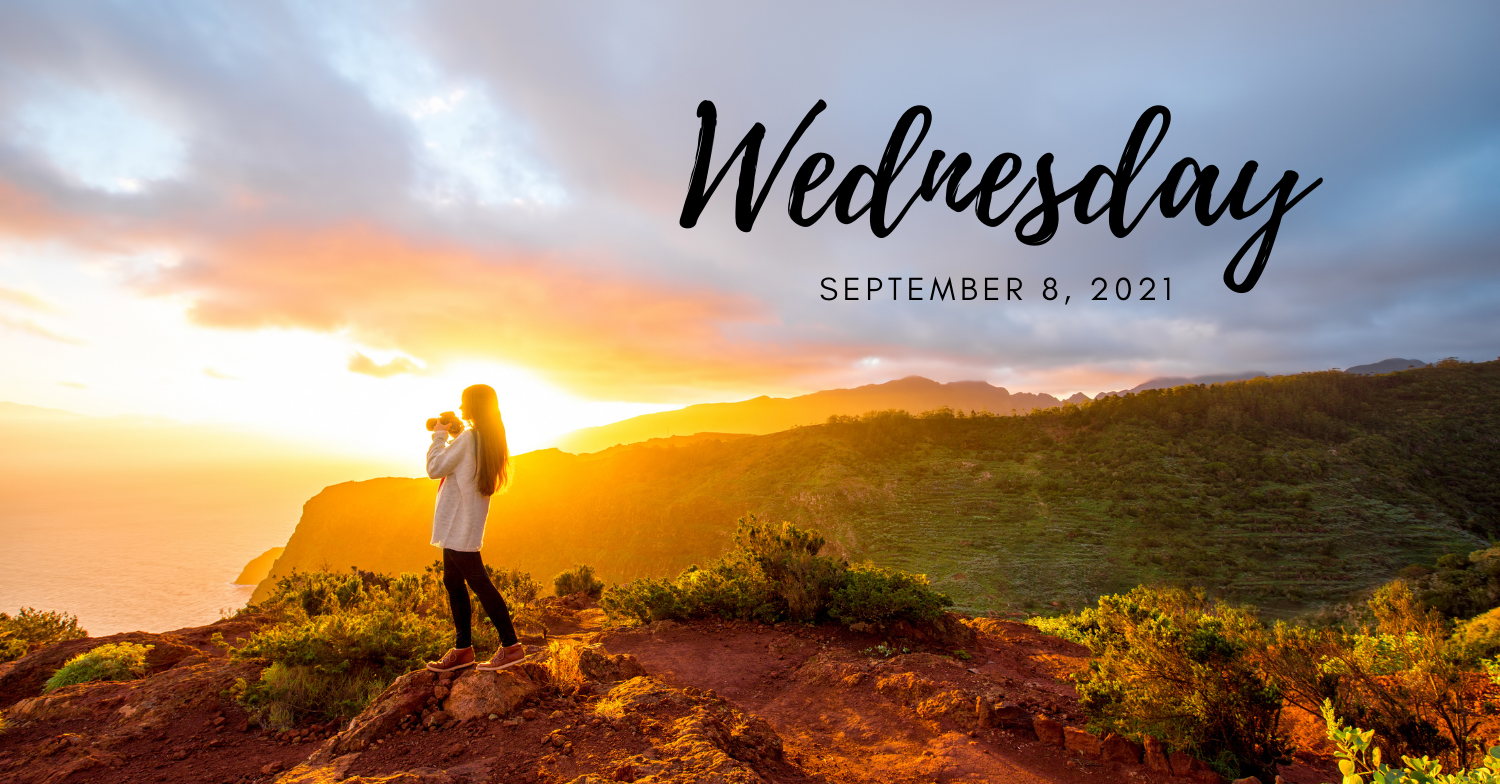 * WEF: This Country Has Just Made Bitcoin Legal Tender. Here's What It Means

HAVANA, Cuba — Cuba on Monday became the first country in the world to vaccinate children from the age of two against COVID-19, using home-grown shots not recognized by the World Health Organization.

The communist island of 11.2 million people aims to inoculate all its children before reopening schools that have been closed for the most part since March 2020.

The new school year started on Monday, but from home via television programs, as most Cuban homes do not have internet access.

Having completed clinical trials on minors with its Abdala and Soberana vaccines, Cuba kicked off its inoculation campaign for children on Friday, starting with those 12 and older. Read More

The NSW government could open pubs to fully vaccinated Sydneysiders in a matter of weeks as it prepares to trial new vaccine passport technology ahead of reaching the state’s target of 70 per cent double-dose vaccination coverage.

Customer Services Minister Victor Dominello on Monday morning shared a sneak peak of what a resident’s “vaccination status” could look like through the QR check-in on the ServiceNSW app as he revealed plans to undertake a trial ahead of the state’s reopening.

Mr Dominello posed for a selfie with his phone, which showed Steve Citizen had successfully check-in to “Betty’s Café” with a green bar declaring he is “vaccinated”.

“Aiming to undertake testing later this month and some pilots in the first half of next month,” Mr Dominello wrote. Read More

WEF: This Country Has Just Made Bitcoin Legal Tender. Here’s What It Means

The government even went a step further in promoting the cryptocurrency’s use by giving US$30 in free bitcoins to citizens who sign up for its national digital wallet, known as “Chivo,” or “cool” in English. Foreigners who invest three bitcoins in the country – currently about $140,000 – will be granted residency.

Does making bitcoin legal tender mean every store and merchant in El Salvador will now have to accept digital payments? If more countries do the same thing, what will this mean for consumers and businesses around the world?

As an economist who studies wealth and money, I believe that briefly explaining what legal tender is will help answer these questions. Read More

A new, no-needle approach to COVID-19 vaccines is being tested by researchers who are hoping it acts like a virus watchdog in the area where COVID-19 attacks.

“It could be a very, very innovative and new type of vaccine. So, we’re really hopeful of how this could help us with the pandemic,” said Cincinnati Children’s Hospital Dr. Paul Spearman. Advertisement Spearman is leading the research on a vaccine known as CVXGA1.

The vaccine is delivered in a nasal spray, like some influenza vaccines.

Researchers believe the vaccine delivered in the nose will help the protection build there and in the upper respiratory system where COVID-19 first attacks and it may do that even better than the mRNA vaccines. Read More

According to the Kan public broadcaster, ministry experts believe that if the high rate of vaccinations continues alongside high levels of new COVID-19 cases as Israel marks a month of Jewish holidays, “there is a good chance that in the next month or two, we’ll reach a situation that is very similar to herd immunity.”

Health officials believe that tens of thousands of Israelis will test positive for COVID-19 in the coming weeks and that many more will receive a third booster dose of the vaccine. Combined, the report claims, more than 80 percent of the population will be relatively protected from the disease, a situation similar to that seen in early June, when new cases slowed to just a trickle. Read More

WHAT A FARCE. RIGHT BEFORE THEIR JEWISH HOLIDAYS.

A new study investigates tiny tumbling soft robots that can be controlled using rotating magnetic fields. The technology could be useful for delivering drugs to the nervous system. In this latest study, researchers put the robots through their paces and showed that they can climb slopes, tumble upstream against fluid flow and deliver substances at precise locations to neural tissue.

Would you let a tiny MANiAC travel around your nervous system to treat you with drugs? You may be inclined to say no, but in the future, “magnetically aligned nanorods in alginate capsules” (MANiACs) may be part of an advanced arsenal of drug delivery technologies at doctors’ disposal. A recent study in Frontiers in Robotics and AI is the first to investigate how such tiny robots might perform as drug delivery vehicles in neural tissue. The study finds that when controlled using a magnetic field, the tiny tumbling soft robots can move against fluid flow, climb slopes and move about neural tissues, such as the spinal cord, and deposit substances at precise locations.

Diseases in the central nervous system can be difficult to treat. “Delivering drugs orally or intravenously, for example, to target cancers or neurologic diseases, may affect regions of the body and nervous system that are unrelated to the disease,” explained Lamar Mair of Weinberg Medical Physics, a medical device company based in the US and an industrial partner on the study. “Targeted drug delivery may lead to improved efficacy and reduced side-effects due to lower off-target dosing.” Read More

Covid-19 is likely “here to stay with us” as the virus continues to mutate in unvaccinated countries across the world and previous hopes of eradicating it diminish, global health officials said Tuesday.

“I think this virus is here to stay with us and it will evolve like influenza pandemic viruses, it will evolve to become one of the other viruses that affects us,” Dr. Mike Ryan, executive director of the World Health Organization’s Health Emergencies Program, said at a press briefing.

Officials at the global health agency have previously said vaccines do not guarantee the world would eradicate Covid-19 like it has other viruses. Several leading health experts, including White House chief medical advisor Dr. Anthony Fauci and Stephane Bancel, CEO of Covid vaccine maker Moderna, have warned that the world will have to live with Covid forever, much like influenza. Read More

WEST CHESTER, Ohio - An Ohio judge ruled this week that a hospital cannot be forced to treat a severely ill COVID-19 patient with ivermectin, reversing an earlier decision by another judge that required the facility to administer the parasite drug despite U.S. Food and Drug Administration warnings.

Butler County Common Pleas Court Judge Michael A. Oster Jr. ruled Monday that "based on the current evidence, ivermectin is not effective as a treatment for COVID-19," court documents show.

Ivermectin, a decades-old drug used to treat worms and other parasites in humans and animals, has received renewed attention during the pandemic. Its use to treat COVID-19 has been promoted by some doctors, Republican lawmakers, and even popular podcast host Joe Rogan, amplified on social media by many who remain resistant to getting vaccinated. It has also been widely used in other countries, including India and Brazil. Read More

BOISE, Idaho (AP) — Idaho public health leaders announced Tuesday that they activated “crisis standards of care” allowing health care rationing for the state’s northern hospitals because there are more coronavirus patients than the institutions can handle.

Idaho public health leaders have activated crisis standards of care for the state's northern hospitals because there are more coronavirus patients than the institutions can handle. Idaho has one of the lowest vaccination rates in the U.S. https://t.co/U3ANPTOgNg

The mu coronavirus variant has been detected in 49 states and 42 countries, according to estimates, as health officials keep an eye on the strain to see if it becomes dominant.

The strain, also known as B.1.621, was first identified in Colombia in January and was added to the World Health Organization’s (WHO) "variants of interest" list, however 49 U.S. states and the District of Columbia have since detected the mu variant, with the exception of Nebraska, according to estimates compiled by Outbreak.info. States with a higher estimated prevalence of the variant include Alaska and Hawaii, though nationwide the variant has been detected in less than 1% of samples.

Dr. Anthony Fauci, the government’s leading infectious disease expert, on Sunday said the delta variant is over 99% of the cases. The mu variant has mutations that "indicate that it might evade the protection from certain antibodies."   Read More

The Taliban drew from its inner high echelons to fill top posts in Afghanistan's new government, including an associate of the Islamist militant movement's founder as premier and a wanted man on a U.S. terrorism list as interior minister.

“Teens for Vaccines” is targeting 12-15 year olds under the guise of Gillick competence, WITHOUT PARENTAL permission or consent. “Gillick Competence” refers to Victoria Gillick, a Catholic campaigner who was passionately opposed to children undergoing medical procedures without their parents’ consent.