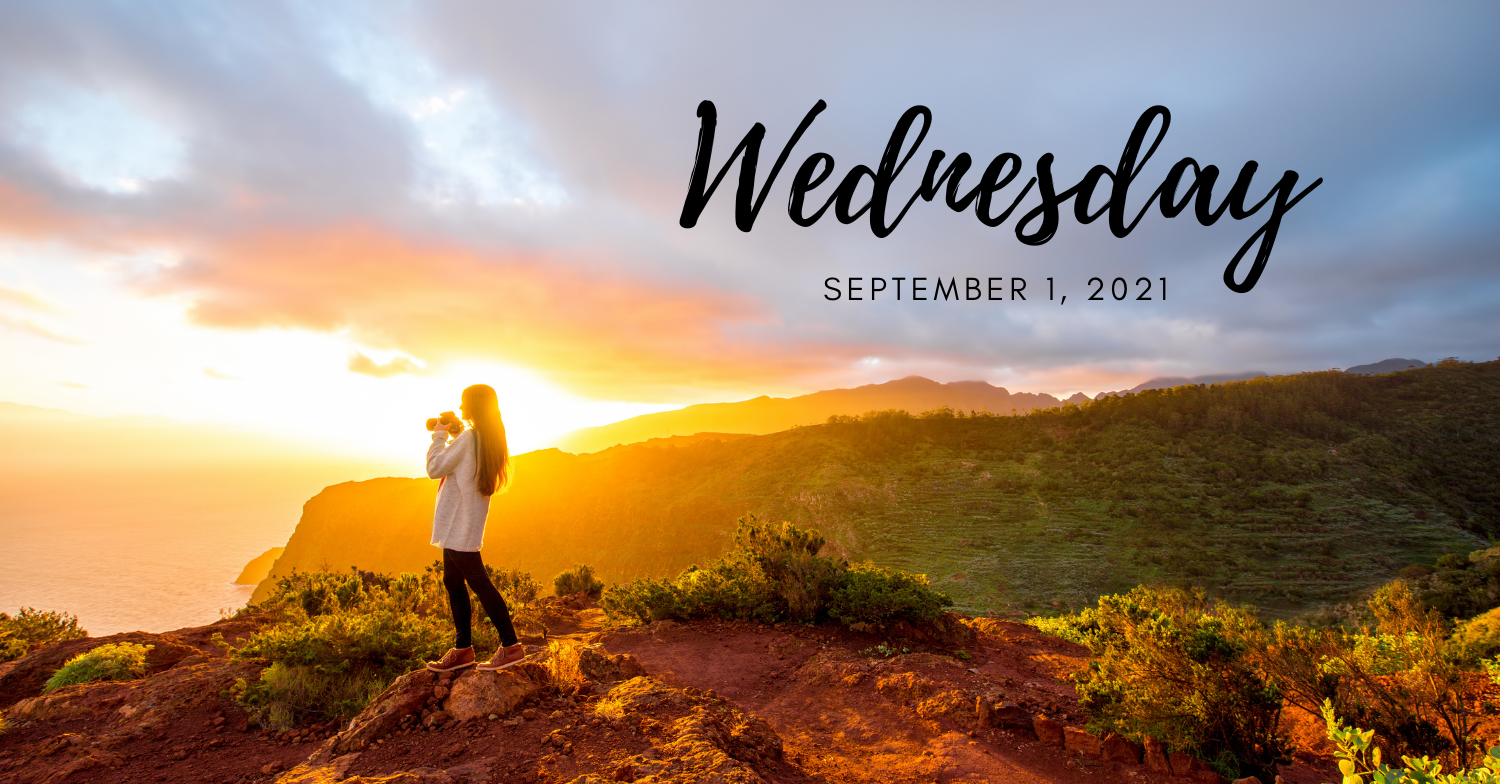 * WEF: Exploring The Relationship Between Climate Change And Extreme Weather

* It Looks Like The Grand Canyon, Bean Field Collapses And Falls 25 Feet Overnight In Rural Minnesota, Baffling Farmers And Experts

* Afghan Interpreter Who Helped Rescue Biden In 2008 Left Behind After U.S. Exit

* Taliban Declare War Is Over

* In A Major Blow To Vaccine Efforts, Senior FDA Leaders Stepping Down

* TOGETHER CAMPAIGN; Backed By Senior Doctors And NHS Staff, Officially Launched In Opposition To Vaccine Passports And Digital ID

* Louisiana Residents Could Face A Month Without Power

* Apple Plans To Add Satellite Features To iPhones For Emergencies

Vaccination certificates are nothing new. They are health documents that record a vaccination event - traditionally as a paper card - with key details including the date, product and batch number of the vaccine administered.

The Digital Documentation of COVID-19 Certificates is proposed as a mechanism by which a person’s COVID-19-related health data can be digitally documented via an electronic certificate.

The certificate can be used in the same way as a paper-based vaccination record/card. That is to provide information to health care providers about the vaccination status of individuals, providing a basis for health workers to offer a subsequent dose and/or appropriate health services as appropriate. In some instances, vaccination cards are also used to facilitate international travel, for example in the case of yellow fever, where a vaccination certificate may be required by some countries as a condition of entry.

A vaccination certificate can be purely digital (for example stored in a smartphone application or on a cloud-based server) and replace the need for a paper card, or it can be a digital representation of the traditional paper-based record. The link between the paper record and the digital record can be established using a barcode, for example, printed on or affixed to the paper vaccination card. A digital certificate should never require individuals to have a smartphone or computer.  Read More

WEF: Exploring The Relationship Between Climate Change And Extreme Weather

This summer, communities from Lake Como in Italy to China, Germany and the United States have witnessed deadly flooding and mudslides that caused widespread loss of lives, homes and other property.

The torrential rains whose impacts have upended life in so many places serve as a stark reminder that climate change is making weather more extreme across the globe, with wildfires also burning bigger and stronger across Europe and North America.

Canada and the western U.S. states, meanwhile, faced record-smashing high temperatures in late June and July that killed hundreds, while even Siberia in Russia's far north experienced a heatwave and forest fires.

Climate scientists say global warming is making weather extremes more likely and frequent - with a flagship report from the Intergovernmental Panel on Climate Change warning this month the situation is likely to worsen even if bigger efforts are made to rein in emissions of planet-heating gases.

In a study, an international team of scientists found climate change has made extreme rainfall events similar to those that led to July's floods in Germany, Belgium, the Netherlands and Luxembourg - which killed at least 220 people - between 1.2 and 9 times more likely to happen. Read More

It Looks Like The Grand Canyon! Bean Field Collapses And Falls 25 Feet Overnight In Rural Minnesota, Baffling Farmers And Experts

A terrifying consequence of the extreme drought near Climax, Minnesota: a small crack in the ground has grown, causing a quarter-mile long stretch of bean field to fall 25 feet. Few have ever seen anything like it.

Wayne and Erllene Erickson are the fourth generation on the family farm, and they’ve never seen anything like this. Nobody is sure what caused the huge slide.

“It’s kind of scary. It is sad, sad to see it,” said Erllene Erickson as she surveyed the fallen field. “Mother Nature does what she wants.”

Geologists with the University of North Dakota say the dry weather, a drop in water levels on the Red River and recent rains can form a perfect storm for things like this to occur. Read More

Afghan Interpreter Who Helped Rescue Biden In 2008 Left Behind After U.S. Exit

“Mr. President...Don’t forget me here.” An Afghan interpreter who 13 years ago helped rescue Joe Biden was left behind Monday when the U.S. ended its military campaign in Afghanistan.

“Mr. President...Don’t forget me here.” An Afghan interpreter who 13 years ago helped rescue Joe Biden was left behind Monday when the U.S. ended its military campaign in Afghanistan. https://t.co/9P1MJFA2AW

Clad in captured American camouflage uniforms, the Taliban envoys grinned broadly while holding weapons and assorted sophisticated military paraphenalia left behind by allied forces as they declared to the world Afghanistan is now under their total control.

“Afghanistan is finally free,” Hekmatullah Wasiq, a top Taliban official, told the Associated Press on the tarmac. “The military and civilian side (of the airport) are with us and in control. Hopefully, we will be announcing our Cabinet. Everything is peaceful. Everything is safe.”

Wasiq also urged the nation of 38 million people to return to work and reiterated the Taliban pledge offering a general amnesty. “People have to be patient,” he said. “Slowly we will get everything back to normal. It will take time.”     Read More

U.S. Truckers Plan Nationwide Protest Against Mandatory Vaccines: “On August 31st, On Tuesday, We’re Asking That Everybody Not Go To Work… This Truck Is Shut Down Officially” (VIDEO)

Tomorrow, Truckers across the United States will stop driving their trucks for at least one day to fight against vaccine mandates.

The Trucker and CDL Life that a protest against mandatory vaccines was planned for truckers across the United States. On Thursday, CLD Life reported,

A trucker-founded anti-vaccine mandate protest is seemingly in the works for the end of this month according to several trucker social media groups.

If carried out, the demonstration will be an alliance between healthcare workers, truckers, military members, and other citizens across the country, and will protest the requirement of the COVID-19 vaccine for employment, travel, and more. The demonstrators, seemingly headed by Tik Tok trucker @thedisrespectedtrucker3, will gather at various locations across the country August 31st – the same day that the Australian trucker protest against COVID lockdown and restrictions is being held. Read More

BREAKING: In A Major Blow To Vaccine Efforts, Senior FDA Leaders Stepping Down

Two of the FDA’s most senior vaccine leaders are exiting from their positions, raising fresh questions about the Biden administration and the way that it’s sidelined the FDA.

Marion Gruber, director of the FDA’s Office of Vaccines Research & Review and 32-year veteran of the agency, will leave at the end of October, and OVRR deputy director Phil Krause, who’s been at FDA for more than a decade, will leave in November. The news, first reported by BioCentury, is a massive blow to confidence in the agency’s ability to regulate vaccines.

The bombshell announcement comes at a particularly crucial moment, as boosters and children’s shots are being weighed by the regulator. The departures also come as the administration has recently jumped ahead of the FDA’s reviews of booster shots, announcing that they might be available by the week of Sept. 20. Read More

There has been a lot of buzz this past week over a new coronavirus variant identified in South Africa that appears to be more highly mutated than any other variant flagged by the World Health Organization (WHO) as a variant of interest or concern, but still comprises just a small share of the country’s Covid-19 cases and has not been conclusively investigated for how its mutations impact the behavior of the virus.

The evolution of this new variant, named C.1.2., was detailed in a preprint study published earlier this month by South Africa’s National Institute for Communicable Diseases and the KwaZulu-Natal Research Innovation and Sequencing Platform.

Evolved from C.1., one of the coronavirus lineages that dominated during the first wave of infections in South Africa in mid-May of last year, C.1.2. was first identified in the South African provinces of Mpumalanga and Gauteng in May 2021. Read More

#Together Campaign; Backed By Senior Doctors And NHS Staff, Officially Launched In Opposition To Vaccine Passports And Digital ID

Representatives include Dr Anthony Hinton; an NHS consultant, Laura Dodsworth; author of ‘State of Fear; Francis Hoar; the barrister who worked with Simon Dolan in an attempt to overturn the Governments to lockdown the United Kingdom, Tonia Buxton; TV star and outspoken critic of lockdown; and Alan Miller founder of #OpenForAll, among others.

Dr Anthony Hinton, a consultant surgeon with 30 years NHS experience has said that “Together we say vaccine passports have no medical logic, are discriminatory and open to abuse by those in power”.  Read More

TORONTO -- Achieving herd immunity against COVID-19 will not be possible without an approved vaccine for children under 12, Public Health Ontario says in a new report about what the pandemic will look like this fall and winter.

Due to the increased transmissibility and partial vaccine escape ability of the Delta B.1.617.2 variant now dominant in Ontario and much of the world, the report says the percentage of the population requiring vaccination to hit a point where virus transmission enters long-term decline now exceeds the number of people actually medically eligible for vaccination at this time.

Louisiana Residents Could Face A Month Without Power

In the wake of Hurricane Ida, one of the most powerful storms ever to hit the U.S. Gulf Coast, residents in southern Louisiana could be without power for a month

NEW HAVEN, Conn. (WTNH) — Another variant of COVID-19 is now appearing around the globe and it has caught the attention of doctors and scientists, including those here in Connecticut.

The new C.1.2 variant could be more transmissible than current strains and even evade protection from vaccines.

The C.1.2 variant has been detected around the globe, from South Africa to the UK, China, and in New Zealand. So far not in the United States, but doctors have pointed out this pandemic is global.

“What’s concerning about this variant right now is its rate of mutation. Its rate of evolution does seem to be a little bit faster in this preliminary report than other viruses we’ve seen before,” says Yale Medicine doctor Richard Martinello. Read More

The World Health Organisation (WHO) has published a guidance document on introducing a digital Covid-19 vaccination certificate – known as a Digital Documentation of Covid-19 Certificates: Vaccination Status (DDCC:VS).

A digital vaccination certificate – which documents a person’s current vaccination status to protect against Covid-19 – can be used for continuity of care or as proof of vaccination for purposes other than healthcare, the health body said.

“A vaccination certificate can be purely digital – stored in a smartphone application or on a cloud-based server – and replace the need for a paper card, or it can be a digital representation of the traditional paper-based record,” the WHO said. Read More

European Union governments agreed to remove the United States from the EU's safe travel list, meaning U.S. visitors and those from five other countries are likely to face tighter controls, such as COVID-19 tests and quarantines

Apple Plans To Add Satellite Features To iPhones For Emergencies

Apple Inc.’s push to bring satellite capabilities to the iPhone will be focused on emergency situations, allowing users to send texts to first responders and report crashes in areas without cellular coverage. The company is developing at least two related emergency features that will rely on satellite networks, aiming to release them in future iPhones, according to a person with knowledge of the situation. Apple has been working on satellite technology for years, with a team exploring the concept since at least 2017, Bloomberg has reported. Speculation that the next iPhone will have satellite capabilities ramped up this week after TF International Securities analyst Ming-Chi Kuo said the phone will probably work with spectrum owned by Globalstar Inc.