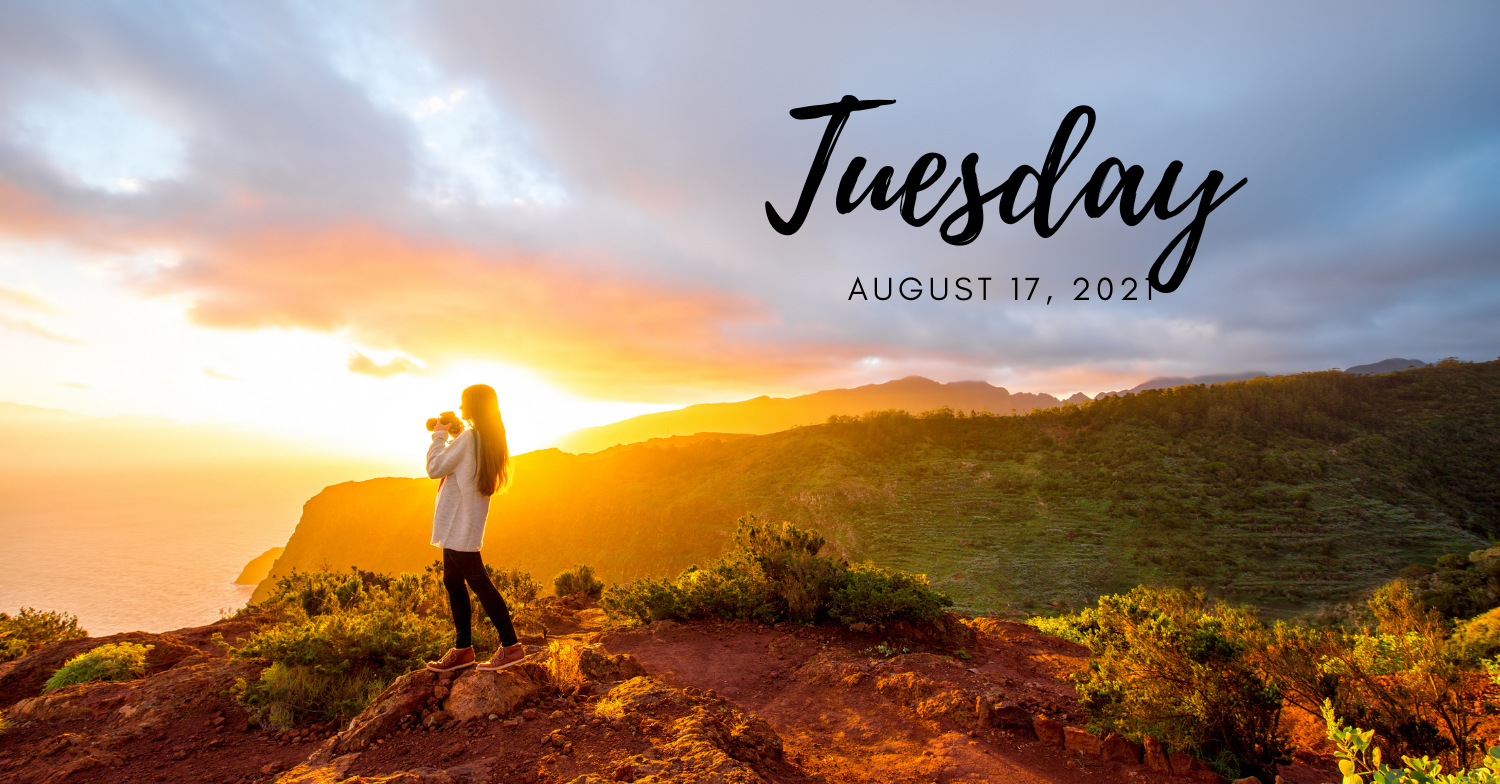 * Haitian Ambassador: 'There Is No Power Lacking Whatsoever'

* Many Bible Preachers Silent On Shots As Covid- 19 Surges

* President Biden Addresses The Nation After Afghanistan Falls To Taliban

Haitian Ambassador: ‘There Is No Power Lacking Whatsoever’

ABC News’ Linsey Davis speaks with Haitian Ambassador to the U.S. Bocchit Edmond, who said the resources the U.S. has given to Haiti isn’t enough after the recent earthquake.

Moderna announced on Aug. 12 a recently published study found their COVID-19 vaccine was 93% effective against the novel coronavirus and its variants, including the highly contagious delta variant, for up to six months, according to a company news release.

The study, published in the journal Science on Aug. 12, noted that antibodies created by Moderna’s COVID-19 vaccine were able to provide continued protection against the virus six months after patients received their second dose.      Read More

National Institutes of Health Director, Dr. Francis Collins, says unvaccinated people are "sitting ducks" as the highly transmissible Delta variant continues to spread in areas across the US.

"Fox News Sunday" anchor Chris Wallace asked Collins about how many new COVID-19 cases we can expect to see on a daily basis as the surge continues.

"I will be surprised if we don't cross 200,000 cases a day in the next couple of weeks," Collins said. "That's heartbreaking considering we never thought we would never be back in that space again. But here we are with Delta variant, which is so contagious, and this heartbreaking situation where 90 million people are still unvaccinated who are sitting ducks for this virus." Read More

A pro-Trump social media platform is not flagging photos and posts depicting child pornography, according to a new report.

The study’s researchers used PhotoDNA, a photo-moderation database, to flag at least 16 images on Gettr that depicted child pornography. They re-uploaded the photos back to the social media platform. However, the images weren’t flagged before being posted, which means Gettr relies on user-based moderation. Read More

The Australian city of Sydney recorded its deadliest day of the COVID-19 pandemic, while residents in Melbourne face a nightly curfew and a further two weeks of lockdown amid a surge in infections.

If you want to put whatever video content you want online and keep it there without risk of it being removed, the Odysee platform will keep your content on the blockchain permanently.

Created in July 2020, video platform Odysee has grown its user base since its launch in December 2020. The YouTube-like platform hosts video content on the LBRY network. Unlike YouTube there are no moderators, and no safety filters for younger viewers – and the content remains on the blockchain permanently.

People forget - or do not know that once data has been added to the blockchain it can not be changed or removed.

Odysee is built on blockchain technology and ensures that its creators' channels can never be deleted. When a channel is created, it is recorded permanently in a distributed ledger on the blockchain. Read More

I was preparing for publishing another article on the CDC’s planned implementation of concentration camps under the guise of Covid mitigation, when I received confirmation of a story from an American GI that Afghanistan, despite assurances from the lying Biden administration, has fallen. Not only has Afghanistan fallen, Communist Chinese troops are everywhere in Afghanistan. In fact, Chinese troops engaged American forces, alongside their Taliban alies as a base was in the process of being abandoned.

It is a case of “shades of Saigon” as elements of the North Vietnamese advanced on Saigon and helicopters had to land on the roof in order to rescue Embassy personnel. America is not far from seeing history repeat itself nearly 50 years later.

If one doubts how much and how long Biden has been lying about events in Afghanistan, watch these 2 videos from the marxist stream media.  Read More

Benefiting from their unique physicochemical properties, graphene derivatives have attracted great attention in biomedicine. In this study, we carefully engineered graphene oxide (GO) as a vaccine adjuvant for immunotherapy using urease B (Ure B) as the model antigen. Ure B is a specific antigen for Helicobacter pylori, which is a class I carcinogen for gastric cancer. Polyethylene glycol (PEG) and various types of polyethylenimine (PEI) were used as coating polymers. Compared with single-polymer modified GOs (GO-PEG and GO-PEI), certain dual-polymer modified GOs (GO-PEG-PEI) can act as a positive modulator to promote the maturation of dendritic cells (DCs) and enhance their cytokine secretion through the activation of multiple toll-like receptor (TLR) pathways while showing low toxicity. Moreover, this GO-PEG-PEI can serve as an antigen carrier to effectively shuttle antigens into DCs. These two advantages enable GO-PEG-PEI to serve as a novel vaccine adjuvant. In the subsequent in vivo experiments, compared with free Ure B and clinically used aluminum-adjuvant-based vaccine (Alum-Ure B), GO-PEG-PEI-Ure B induces stronger cellular immunity via intradermal administration, suggesting promising applications in cancer immunotherapy. Our work not only presents a novel, highly effective GO-based vaccine nano-adjuvant, but also highlights the critical roles of surface chemistry for the rational design of nano-adjuvants. Read More

House Speaker Nancy Pelosi’s major announcement on Thursday caused both excitement and trepidation, often from the same people: She was raising the maximum allowable salary for House staffers to $199,300.

That move would allow senior aides to make more than rank-and-file members of Congress, who earned $174,000. House lawmakers’ salaries had served as an unspoken ceiling for how much their own staff could make.

Good government groups, current and former staffers, and a special bipartisan House committee have long demanded that change, which they say will keep experienced aides and policy experts on the Hill. But some current House employees fear that staffers at the junior level, whose salaries can start in the $20,000s and $30,000s and who most desperately need a raise, won’t fare any better.

“When we heard this news, the first thing that came to my mind was number one: Finally,” said Herline Mathieu, president of the Congressional Black Associates.

“Number two,” she continued, “How are junior staffers going to benefit from this?”

The fear is, they won’t. Read More

Breaking News: In a first, the U.S. government declared a shortage on the Colorado River, forcing water cuts in Arizona, Nevada and Mexico. https://t.co/jjcDKKYEZn

Many Bible Belt Preachers Silent On Shots As COVID-19 Surges

UNDATED (AP) - Health officials have an unsteady partner as they try to get more people vaccinated against COVID-19 in the Bible Belt: churches and pastors.

Some preachers are praying for more inoculations and hosting vaccination clinics. Others are skirting the topic of vaccines or openly preaching against them in a region that’s both deeply religious and reeling from a spike in cases.

A survey by the National Association of Evangelicals found that 95% of evangelical leaders planned to get inoculated.

But theologian Curtis Chang says that hasn’t translated into ministers widely advocating for vaccinations. He says the vast majority are on the sidelines afraid to speak out about a polarizing topic. Read More

NASHVILLE, Tenn. (WKRN) – The Tennessee Department of Health says members of the Tennessee National Guard will deploy to hospitals to respond to the rising number of hospitalizations in the state to fill the bed and staffing shortages.

Dr. Lisa Piercy appeared for a 30-minute briefing concerning COVID-19 and the rapid spread of infections leading to a backlog in Tennessee hospitals.

“We are having hospital capacity concerns on both the pediatric side as well as the adult side,” Piercey said.             Read More

President Joe Biden addresses the nation after Taliban fighters take over Kabul, the capital of Afghanistan, and refugees attempt to flee the war-torn country.