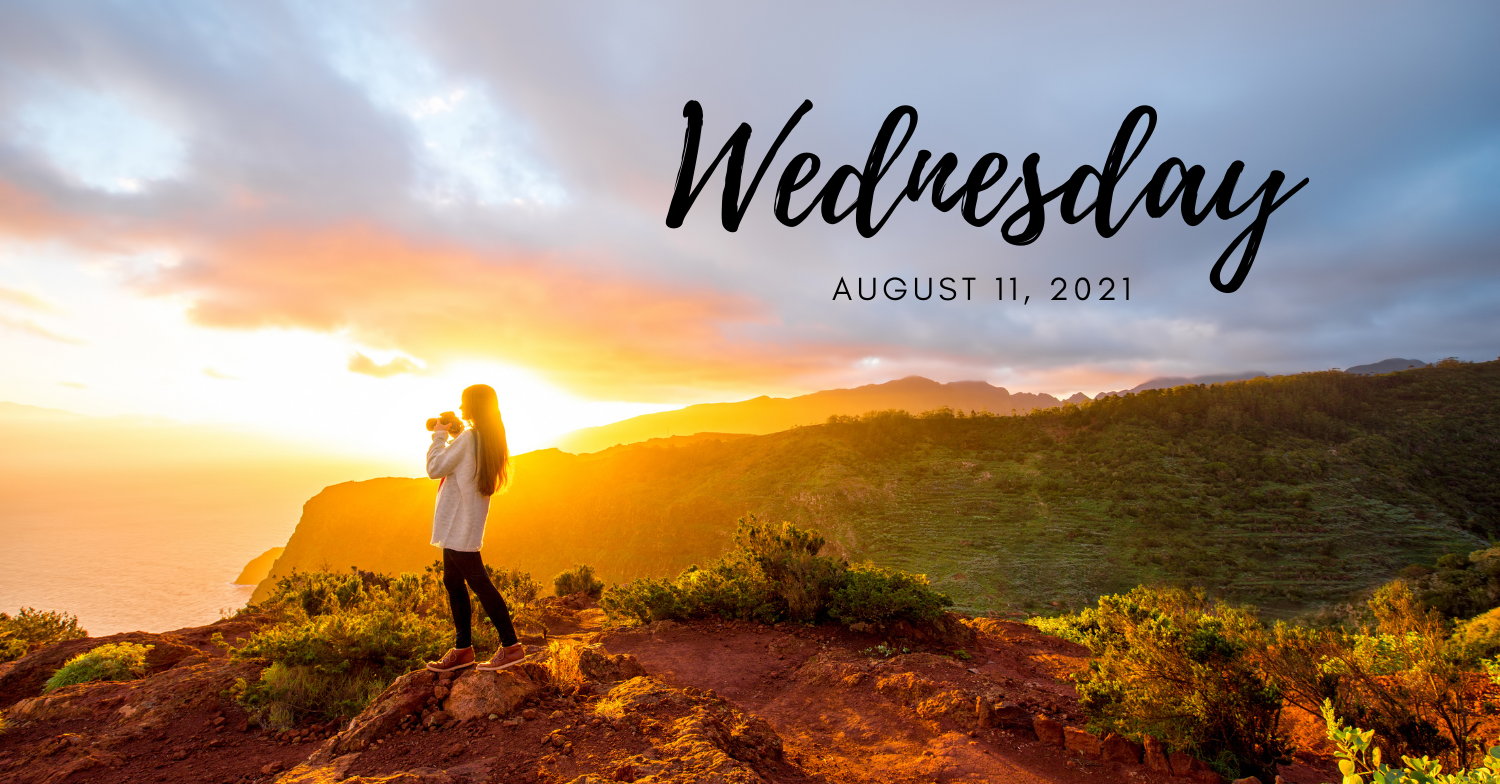 * CNN Tracks Down A Super Spreader of Covid- 19 Misinformation

Heating from humans has caused irreparable damage to the Earth that may get worse in coming decades, a UN climate report has concluded. Humanity's damaging impact on the climate is a "statement of fact", UN scientists have found in unprecedented research combining more than 14,000 studies. The past five years have been the hottest on record since 1850. Extremes including heatwaves have become more frequent and more intense since the 1950s, while cold events have become less frequent and less severe. The authors also show that a rise in sea levels approaching 2m by the end of this century "cannot be ruled out".

LONDON, Aug 5(Reuters) - Eight years after its last update on climate science, the United Nations is set to publish a report Monday that will likely deliver even starker warnings about how quickly the planet is warming – and how damaging the impacts might get.

Since the last report by the U.N. Intergovernmental Panel on Climate Change (IPCC) in 2013, both greenhouse gas emissions and the average global temperature have only continued to climb.

The new report will forecast how much more emissions can be pumped into the atmosphere before the average global temperature rises more than 1.5 degrees Celsius. That revised carbon budget may serve as a guide to governments as they map out their own emissions-cutting plans before a major U.N. climate conference in November. Read More

WION -The World is One News, examines global issues with in-depth analysis. We provide much more than the news of the day. Our aim to empower people to explore their world. With our Global headquarters in New Delhi, we bring you news on the hour, by the hour. We deliver information that is not biased. We are journalists who are neutral to the core and non-partisan when it comes to the politics of the world. People are tired of biased reportage and we stand for a globalised united world. So for us the World is truly One.

The Atlantic Ocean’s current system, an engine of the Northern Hemisphere’s climate, could be weakening due to climate change, which could have severe consequences for the world’s weather including  “extreme cold” in Europe and parts of North America and rising sea levels in parts of the United States, according to a new scientific study.

The Atlantic Meridional Overturning Circulation (AMOC) is part of a large system of ocean currents, known as the Gulf Stream, that transports warm water from the tropics northwards into the North Atlantic.

“The loss of dynamical stability would imply that the AMOC has approached its critical threshold, beyond which a substantial and in practice likely irreversible transition to the weak mode could occur,” said Niklas Boers at the Potsdam Institute for Climate Impact Research and author of the study published on Thursday. Read More

Accelerating complexity can make it difficult to keep up with the latest trends, or make sense of seemingly abrupt shifts. In this context, we all need more innovative tools to help us make more strategic decisions.

The World Economic Forum has developed Strategic Intelligence to provide these tools, and illuminate the interlinked forces shaping the world. With the help of leading experts, the platform covers more than 270 diverse topics.          Read More

NEW YORK, Aug 9 (Reuters) - The U.S. dollar index was little changed on Monday as investors assessed how rising COVID-19 cases in the United States might affect the outlook for the economy.

Data Monday showed U.S. job openings jumped to a fresh record high in June and hiring increased. That came on the heels of Friday's U.S. monthly jobs report that showed U.S. employers hired the most workers in nearly a year in July and continued to raise wages.

President Joe Biden celebrated the Senate’s passage of a historic, sweeping $1.2 trillion bipartisan package on Tuesday, a step toward fulfilling a key item in his legislative agenda that also amounts to the biggest bipartisan win of his presidency so far.

“The death of this legislation was mildly premature,” Biden said during a speech at the White House Tuesday afternoon. “After years and years of ‘Infrastructure Week,’ we are on the cusp of an infrastructure decade that I truly believe will transform America.”

President Biden on the Senate passage of $1.2 trillion infrastructure bill: “There are no Republican bridges or Democratic roads. … This is about us doing the real hard work of governing. This is about democracy delivering for the people” https://t.co/94Pu0DzVer pic.twitter.com/n9lVbP8bjp

CNN Tracks Down A Super-Spreader Of Covid-19 Misinformation

CNN's Randi Kaye attempts to track down Dr. Joseph Mercola to find out why he continues to spread misinformation about Covid-19 and the vaccine. This is a new version of a previously uploaded video.

Brazzaville/Conakry – Health authorities in Guinea today confirmed a case of Marburg virus disease in the southern Gueckedou prefecture. This is the first time Marburg, a highly infectious disease that causes haemorrhagic fever, has been identified in the country, and in West Africa.

Marburg, which is in the same family as the virus that causes Ebola, was detected less than two months after Guinea declared an end to an Ebola outbreak that erupted earlier this year. Samples taken from a now-deceased patient and tested by a field laboratory in Gueckedou as well as Guinea’s national haemorrhagic fever laboratory turned out positive for the Marburg virus. Further analysis by the Institut Pasteur in Senegal confirmed the result.

The patient had sought treatment at a local clinic in Koundou area of Gueckedou, where a medical investigation team had been dispatched to probe his worsening symptoms.

“We applaud the alertness and the quick investigative action by Guinea’s health workers. The potential for the Marburg virus to spread far and wide means we need to stop it in its tracks,” said Dr Matshidiso Moeti, World Health Organization (WHO) Regional Director for Africa. “We are working with the health authorities to implement a swift response that builds on Guinea’s past experience and expertise in managing Ebola, which is transmitted in a similar way.”

The culprit behind Florida's 3 million pounds of dead marine life is a harmful algae bloom that caused Florida to declare a state of emergency three years ago. It's called a red tide because it can turn the ocean a rusty red color.

Red tides are formed by Karenia brevis, a microscopic but powerful organism that occurs naturally in the Gulf of Mexico.

But it's not just life under the sea that's being damaged by the algae bloom - small businesses across Florida's tourism and seafood industries are suffering from the repercussions of the red tide as well.

"We were certainly impacted, we had to close for almost two months of harvest," Lost Coast Oyster, Tampa's first sustainable oyster farm, told Insider. "During that two months of closure, we still have to go out and take care of our farm ... and the products we're sitting on and not able to sell, some of it dies." Read More

A number of San Francisco deputies will seek employment elsewhere or opt for early retirement if they are required to take the COVID-19 vaccine under a new imposed vaccine mandate, warned the city’s sheriff’s union on Friday.

There are about 35,000 city employees. Religious exemptions or medical reasons may let some bypass the mandate, but those who refuse the shot and have no exemption will encounter consequences that could result in termination, reported the San Francisco Chronicle.

The San Francisco Deputy Sheriffs’ Association published a statement on Facebook, saying they always supported safety measures against the virus but the issue at hand is that about 160 of their Sheriffs don’t want to take the vaccine due to their beliefs.

“The problem we are faced with now is the strict San Francisco Mandate which is vaccinate or be terminated. If deputy sheriffs are forced to vaccinate a percentage of them will retire early or seek employment elsewhere,” reads the statement.

The Sheriff’s Association notes that 160 of their 700 deputies are unwilling to take the vaccine, and that they can’t afford to lose them since they already have the lowest-ever staffing due to applicant testing restrictions imposed by the mayor. Read More

CDC Sounds Alarm: 2 Dead In US From Disease Never Seen Outside Tropics

The US Centers for Disease Control and Prevention is sounding the alarm on a rare illness that was previously only seen in tropical climates, particularly South Asia and northern Australia.

Now, two people are dead and two have recovered after being infected with melioidosis — a disease that had never before been detected on contiguous US soil. Melioidosis has now been seen in Georgia, Kansas, Texas and Minnesota, LiveScience reported. The only other known cases of melioidosis in the US were in the Virgin Islands and Puerto Rico in the Caribbean.

None of the four patients claimed to have traveled outside the country prior to becoming sick between March and July of this year.

The CDC “believes the most likely cause is an imported product (such as a food or drink, personal care or cleaning products or medicine) or an ingredient in one of those types of products,” according to the statement released Monday. Read More

FEMA is the executive arm of the coming police state and thus will head up all operations. The Presidential Executive Orders already listed on the Federal Register also are part of the legal framework for this operation.

The camps all have railroad facilities as well as roads leading to and from the detention facilities. Many also have an airport nearby. The majority of the camps can house a population of 20,000 prisoners. Currently, the largest of these facilities is just outside of Fairbanks, Alaska. The Alaskan facility is a massive mental health facility and can hold approximately 2 million people. Read More

What are some skywatching highlights in August 2021? The best-known meteor shower of the year should be a good time this year on the peak night of Aug. 11, with no bright Moon to interfere. Jupiter and Saturn are at their best all month long. And on Aug. 22, the full moon will be a "seasonal blue moon."