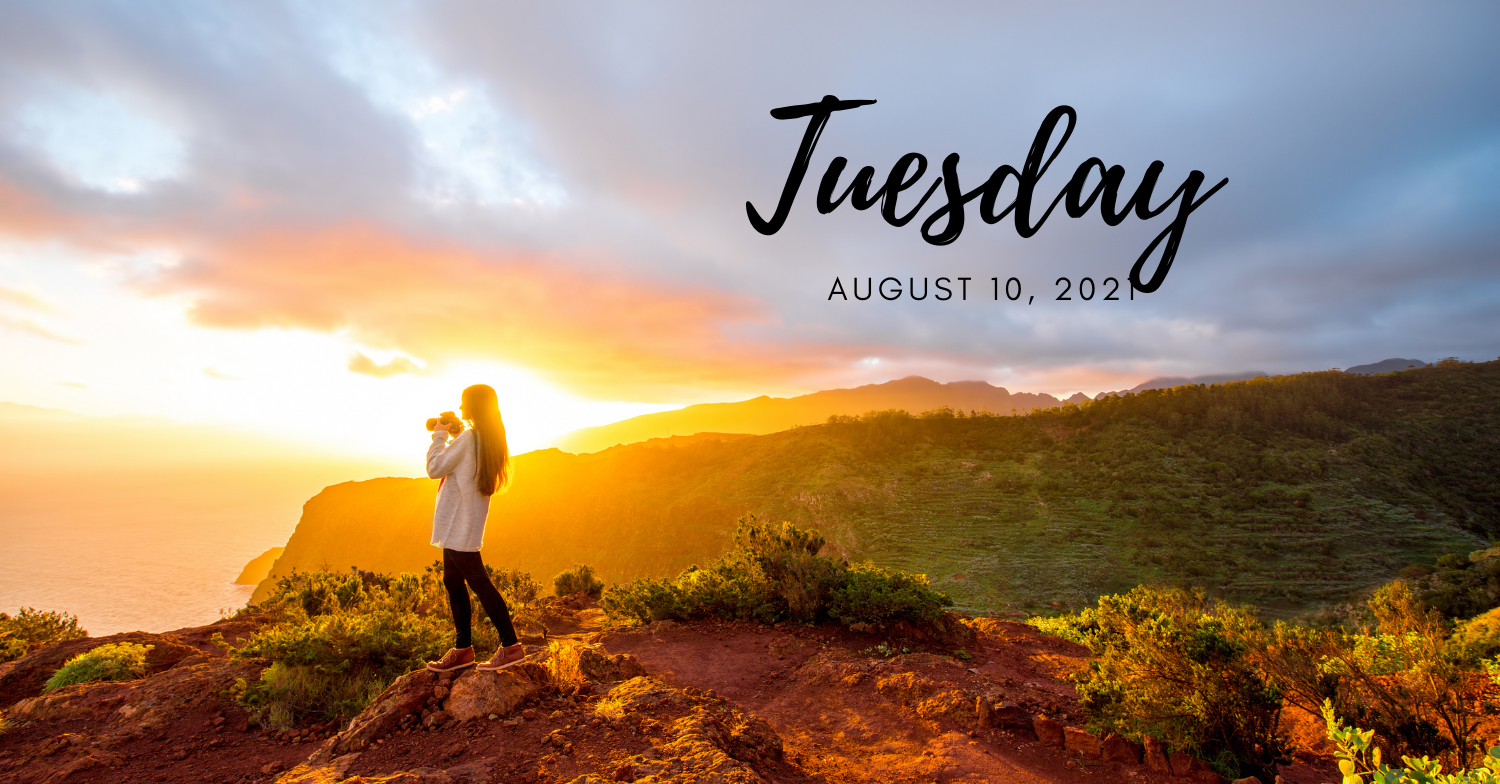 * UN Says Planet Will Warm By 1.5 Degrees Celsius Over 20 Years

* WEF: Why Digitalization Is Critical To Creating A Global Circular Economy

* In A World First, South Africa Grants Patent To An Artificial Intelligence System

* New Identity Authentication Requirement For Unemployment Spreads Across The Country

* Pentagon To Require Covid Vaccine For All Troops By Sept 15Th

UN Says Planet Will Warm By 1.5° Celsius Over 20 Years

Aug.09 -- An epochal new report from the world’s top climate scientists warns that the planet will warm by 1.5° Celsius in the next two decades without drastic moves to eliminate greenhouse gas pollution. Ko Barrett, IPCC Vice Chair and Senior Advisor for climate at the NOAA, says the report shows that humans are to blame for widespread climate change.

WEF : Why Digitalization Is Critical To Creating A Global Circular Economy

In today’s linear economy, raw materials are extracted from resource-rich countries, transported to manufacturers, and processed into products. The finished goods then get shipped – often a great distance –where they are used, discarded at their end of life, and eventually replaced by newer iterations.

In the linear economy, resource throughput is enormous and highly international; resources are only recovered to a small degree.

The circular economy ensures we can move to a resource-efficient and profitable modern global economy and continue the economic growth that has moved billions of people out of poverty, while mitigating linear production practices that start with materials extraction and flow to manufacturing, use, incineration, and landfill, straining the earth’s resources. Read More

The first part of the Sixth Assessment Report of the Intergovernmental Panel on Climate Change (IPPC) was published on Monday Aug. 9. This report details how anthropogenic greenhouse gases are causing unprecedented damage.

It uses the strongest language yet to rebuke skepticism of the link between human activities and global warming, stating that "it is unequivocal that human influence has warmed the atmosphere, ocean, and land."

The IPCC, which consists of 195 governments, has emerged as one of the most credible sources of climate science. IPCC members aggregate and agree to the best climate science available globally before publishing. The new IPCC climate change report contains several key findings. Read More

From 9 to 11 August 2021, UN-SPIDER and the Islamic Republic of #Iran will hold a workshop, hosted by the #IranianSpaceAgency, to explore how space technologies help identify and monitor the effects of #climatechange, including #droughts and #flashfloods. https://t.co/enfVz6NevD

Amazon.com Inc. -- summoning its inner Oprah -- will offer cash prizes of as much as $500,000 as well as cars and vacation packages to frontline employees who can prove they have been vaccinated against Covid-19.

Unwilling so far to mandate vaccinations for its 1.3-million-strong workforce, the world’s largest online retailer is hoping a corporate lottery -- called Max Your Vax -- will persuade holdouts to get the jab. The announcement, a copy of which was seen Friday by Bloomberg, came the same day that Amazon said that starting Aug. 9 workers would have to wear masks in its logistics facilities, regardless of vaccination status -- a reflection of the severity of the spreading delta variant of the coronavirus. Vaccinated workers had been able to work at Amazon mask-free since late May.

Amazon had previously offered frontline workers as much as $80 if they were inoculated against the virus. The company is desperate for workers to keep up with elevated demand from online shoppers and staff dozens of new facilities coming online. Some frontline Amazonians and their managers said the company is concerned mandates would send vaccine skeptics in their ranks in search of other jobs. Read More

Lake Oroville and Oroville Dam are part of the Oroville–Thermalito Complex, a water infrastructure complex including the Hyatt Powerplant, Thermalito Diversion Dam and Powerplant, the Feather River Fish Hatchery, Thermalito Power Canal, Thermalito Forebay, Thermalito Pumping-Generating Plant, Thermalito Afterbay, and the Lake Oroville Visitors Center. The lake is fed by the North Fork, Middle Fork, West Branch and South Forks of the Feather River watershed. This watershed drains an area of 3,611 square miles (9,350 km2). The North Fork and Middle Fork Feather Rivers comprise 3,222 square miles (8,340 km2) of this area which includes portions of the foothill and mountain regions of the northern Sierra Nevada and southern Cascade Range. Storing over 3,500,000 acre-feet (4.3 km3), it is the second-largest reservoir in California, after Shasta Lake. About one-third of the water released from the reservoir goes to uses between the Oroville and Sacramento–San Joaquin Delta. Lake Oroville plays an important role in flood management, water quality, and the health of fisheries affecting areas downstream like the Sacramento-San Joaquin River Delta. During the warm season, the primary source of streamflow is melting snow, occurring April 1 – July 31, and Lake Oroville receives about 40 percent of the annual total inflow. The lake's storage and releases are a key part of the hydropower and water-supply facilities of the Oroville Complex, the reason it's a pillar and major source of flexibility of the SWP.The downstream flow limits set by the USACE for Lake Oroville are 150,000 cu ft/s (4,200 m3/s) north of Honcut Creek, 180,000 cu ft/s (5,100 m3/s) above the mouth of the Yuba River, and 320,000 cu ft/s (9,100 m3/s) south of the Bear River.

In a Facebook earnings call last week, Mark Zuckerberg outlined the future of his company. The vision he put forth wasn’t based on advertising, which provides the bulk of Facebook’s current profits, or on an increase in the over-all size of the social network, which already has nearly three billion monthly active users. Instead, Zuckerberg said that his goal is for Facebook to help build the “metaverse,” a Silicon Valley buzzword that has become an obsession for anyone trying to predict, and thus profit from, the next decade of technology. “I expect people will transition from seeing us primarily as a social-media company to seeing us as a metaverse company,” Zuckerberg said. It was a remarkable pivot in messaging for the social-media giant, especially given the fact that the exact meaning of the metaverse, and what it portends for digital life, is far from clear. In the earnings call, Zuckerberg offered his own definition. The metaverse is “a virtual environment where you can be present with people in digital spaces,” he said. It’s “an embodied Internet that you’re inside of rather than just looking at. We believe that this is going to be the successor to the mobile Internet.” Read More

In A World First, South Africa Grants Patent To An Artificial Intelligence System

At first glance, a recently granted South African patent relating to a “food container based on fractal geometry” seems fairly mundane. The innovation in question involves interlocking food containers that are easy for robots to grasp and stack.

On closer inspection, the patent is anything but mundane. That’s because the inventor is not a human being – it is an artificial intelligence (AI) system called DABUS.

DABUS (which stands for “device for the autonomous bootstrapping of unified sentience”) is an AI system created by Stephen Thaler, a pioneer in the field of AI and programming. The system simulates human brainstorming and creates new inventions. DABUS is a particular type of AI, often referred to as “creativity machines” because they are capable of independent and complex functioning. This differs from everyday AI like Siri, the “voice” of Apple’s iPhones.

The patent application listing DABUS as the inventor was filed in patent offices around the world, including the US, Europe, Australia, and South Africa. But only South Africa granted the patent (Australia followed suit a few days later after a court judgment gave the go-ahead). Read More

BBC studios at Television Centre in West London were targeted by an agitated group of protesters opposing the government’s Covid-19 plans. The crowd attempted to break into the building, causing clashes with police.

The dramatic confrontation at the entrance of the BBC studios was filmed by witnesses at the scene. The footage showed a dozen or so Metropolitan Police officers rushing to stop the demonstrators, who appeared intent on forcing their way in.

Tempers ran high as members of the protesting group then stood in a human chain in front of the police, telling fellow protesters to keep in line. The crowd, which quickly grew in numbers, started chanting, “Shame on you!”, but refrained from attempting to get inside again. A handful of children standing behind the crowd joined the chanting. Read More

New Identity Authentication Requirement For Unemployment Spreads Across The Country

In an effort to prevent fraudulent claims which have plagued the online unemployment system, Pennsylvania has hired ID.me, a McLean, Virginia-based company, to authenticate users.

“We are also now under contract with an additional two states. ID.me Spokesman Nicholas Michael told The Epoch Times.

“Our federal partners include the Department of Veterans Affairs and Social Security Administration.”

Unemployment applicants in these states must submit to a new, more invasive level of vetting to receive payments.

ID.me’s online authentication process begins with a request for permission to use details from the user’s credit profile and other public sources. Soon after that, the system requires users to consent to ID.me collecting their Social Security number and biometric data. The user cannot continue the process or receive unemployment without consenting.      Read More

Pentagon To Require COVID Vaccine For All Troops By Sept. 15

WASHINGTON (AP) — The Pentagon will require members of the U.S. military to get the COVID-19 vaccine by Sept. 15, according to a memo obtained by The Associated Press. That deadline could be pushed up if the vaccine receives final FDA approval or infection rates continue to rise.

“I will seek the president’s approval to make the vaccines mandatory no later than mid-September, or immediately upon” licensure by the Food and Drug Administration “whichever comes first,” Defense Secretary Lloyd Austin says in the memo to troops, warning them to prepare for the requirement. “I will not hesitate to act sooner or recommend a different course to the President if l feel the need to do so.” Read More

RIGHT AFTER ATTACKING ISRAEL, BIDEN VOWS TO GIVE $100 MILLION TO HEZBOLLAH

It should be noted that Lebanon is currently controlled by the Hezbollah terror organization.

Lebanon marked a year since the cataclysmic explosion at Beirut’s port on Wednesday. The iconic event devastated the capital city. Since that historic event, Lebanon has suffered a severe financial depression worsened by the coronavirus pandemic.

“Today I’m announcing nearly $100 million in new humanitarian assistance,” Biden said to a UN-sponsored donor conference for Lebanon which was led by France.

“But no amount of outside assistance will ever be enough if Lebanon’s leaders do not commit to do the hard but necessary work of reforming the economy and combating corruption,” he added. Read More