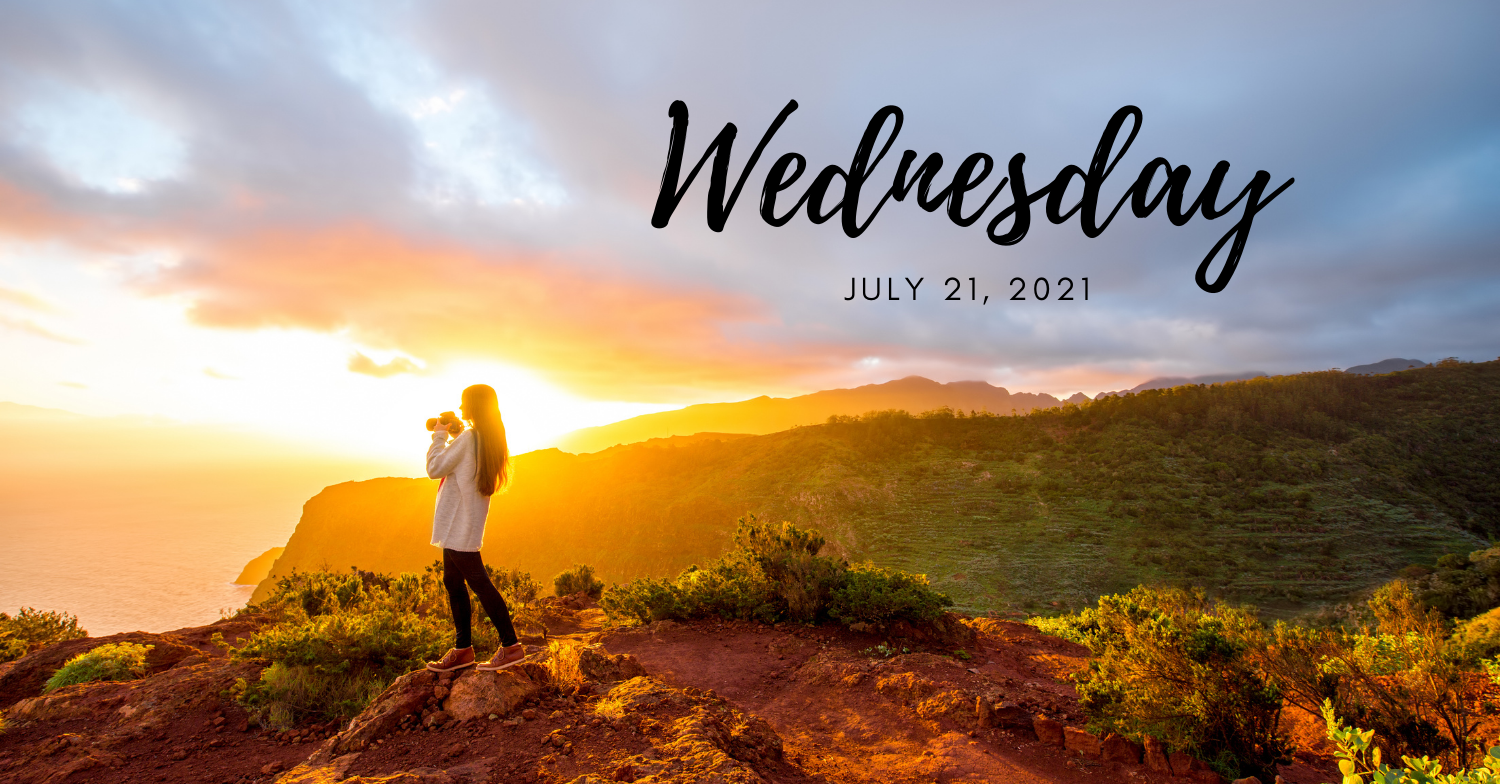 * China Is Buying Up American Farms Washington Wants To Crack Down

* Jeff Bezos Blasts Into Space On Own Rocket

* Hannity Pleads With His Viewers To Get Vaccinated

* Is Your ARK Ready? Flooding Are Surging Around The World And Seem To Become A New Normal

An Israeli company's spyware was used in attempted and successful hacks of 37 smartphones belonging to journalists, government officials and human rights activists around the world, according to an investigation by 17 media organizations.

A video has appeared online that reportedly is circulating among Chinese Communist Party channels in which the repressive regime on the mainland there threatens to unleash a "continuous" nuclear war on the world.

"When we liberate Taiwan, if Japan dares to intervene by force, even if it only deploys one soldier, one plane and one ship, we will not only return reciprocal fire but also start a full-scale war against Japan," the statement threatens.     Read More

China Is Buying Up American Farms. Washington Wants To Crack Down.

The push to drain China’s influence from the U.S. economy has reached America’s farm country, as congressional lawmakers from both parties are looking at measures to crack down on foreign purchases of prime agricultural real estate.

The debate over farm ownership comes amid broader efforts by Congress and the Biden administration to curb the nation’s economic reliance on China, especially in key industries like food, semiconductors and minerals deemed crucial to the supply chain. The call for tighter limits on who owns America’s farms has come from a wide range of political leaders, from former Vice President Mike Pence to Sen. Elizabeth Warren (D-Mass.), after gaining momentum seeded in farm states. Read More

Dr. Anthony Fauci To Sen. Rand Paul At Hearing: You Do Not Know What You're Talking About

Senator Rand Paul (R-Ky.) and Dr. Anthony Fauci, director of the U.S. National Institute of Allergy and Infectious Diseases, got into a heated exchange this morning during a hearing on the origins of the Covid-19 virus. After Paul alleged that Fauci lied to Congress, the doctor told Paul he didn't know what he was talking about.

The numbers are deeply worrisome.Covid-19 cases -- fueled by the fast-spreading Delta variant -- have nearly tripled over the past three weeks. Every state in the country has seen an increase in cases.

FEMA, in coordination with the Federal Communications Commission, will conduct a nationwide test of the Emergency Alert System (EAS) and Wireless Emergency Alerts (WEA) this summer.

The national test will consist of two portions, testing WEA and EAS capabilities. Both tests will begin at 2:20 p.m. ET on Wednesday, Aug. 11.

The Wireless Emergency Alert portion of the test will be directed only to consumer cell phones where the subscriber has opted-in to receive test messages. This will be the second nationwide WEA test, but the first nationwide WEA test on a consumer opt-in basis. The test message will display in either English or in Spanish, depending on the language settings of the wireless handset.

The Emergency Alert System portion of the test will be sent to radios and televisions. This will be the sixth nationwide EAS test. Read More

Jeff Bezos Blasts Into Space On Own Rocket: ‘Best Day Ever!’

VAN HORN, Texas— Jeff Bezos blasted into space Tuesday on his rocket company’s first flight with people on board, becoming the second billionaire in just over a week to ride his own spacecraft.

Jeff Bezos is about to soar on his space travel company's first flight with people on board. The founder of Blue Origin as well as Amazon will become the second billionaire to ride his own rocket following Virgin Galactic's Richard Branson. https://t.co/9Vzll3NwZ8

The Department of Homeland Security has ordered pipeline owners and operators to implement “urgently needed protections” against cyberattacks, in the second such directive since a crippling ransomware attack in May.

The Department of Homeland Security (DHS) issued its latest directive to pipeline owners and operators on Tuesday, more than two months after a ransomware attack shut down a critical gasoline and diesel pipeline carrying half the fuel supply of the entire US East Coast. The attack forced the line’s operator, Colonial Pipeline, to shut much of its network for several days, until a ransom was paid to the cybercriminals responsible.

The directive asks companies like Colonial Pipeline to “implement specific mitigation measures to protect against ransomware attacks,” to “develop and implement a cybersecurity contingency and recovery plan,” and to “conduct a cybersecurity architecture design review.”  Read More

George Soros and Bill Gates are part of a consortium acquiring a British developer of rapid-testing technology, including for Covid-19 and tropical diseases, to turn it into a social enterprise.

The group, led by the Soros Economic Development Fund, an investment division of the billionaire philanthropist’s Open Society Foundations, is investing at least £30 million in Mologic, which develops lateral flow and fast diagnostic technologies. Read More

Spiked Online Editor Brendan O’Neill says French President Emmanuel Macron has “gone mad”. “If you look at his vaccine passport idea, it is absolutely crazy,” Mr O’Neill told Sky News host Rita Panahi. “He wants to have a severe system whereby if you aren’t double vaccinated then you basically are no longer a free citizen. “I’m delighted to see people protesting, the way to encourage people to get the vaccination is through persuasion, not through authoritarianism and our leaders should remember that.”

Hannity Pleads With His Viewers To Get Vaccinated: 'I Believe In The Science Of Vaccination'

"Please take COVID seriously," begged Hannity. "I can't say it enough. Enough people have died. We don't need anymore death. Research like crazy. Talk to your doctor, your doctors, medical professionals you trust based on your unique medical history, your current medical condition, and you and your doctor make a very important decision for your own safety. Take it seriously."

Preliminary data from several states has shown that over the past few months, 99.5 percent of the people who have died from COVID were unvaccinated, and Hannity's plea comes as the highly contagious Delta variant, which is now the dominant strain in the United States, spreads throughout the country. Read More

A senior spokesperson for House Speaker Nancy Pelosi and a White House official tested positive for Covid-19 after coming into contact with Democrats from the Texas state legislature last week.

House GOP leadership hold a weekly press briefing in which they condemned President Biden's response to the protests in Cuba and the continuing surge of migrants crossing the southern border.

CNBC's Shep Smith reports that House Minority Leader Kevin McCarthy has named the 5 GOP representatives he hopes to have on the House select committee investigating the insurrection on January 6th. For access to live and exclusive video from CNBC subscribe to CNBC PRO

Is your ARK ready? Floodings are surging around the world and seem to become a new normal…

Apocalyptic floodings aren’t only happening in Germany and Belgium right now. Actually, it seems that such biblical floods are increasing around the world and are becoming a new normal! Here the latest worldwide reports. The two dams failed on Sunday afternoon after a torrential downpour saw 87 millimeters of rainfall in the area over the weekend and 223 millimeters at a nearby monitoring. Read More

TOKYO -Britain said on Tuesday it would permanently deploy two warships in Asian waters after its Queen Elizabeth aircraft carrier and escort ships sail to Japan in September through seas where China is vying for influence with the United States and Japan.

Plans for the high-profile visit by the carrier strike group come as London deepens security ties with Tokyo, which has expressed growing alarm in recent months over China's territorial ambitions in the region, including Taiwan.           Read More