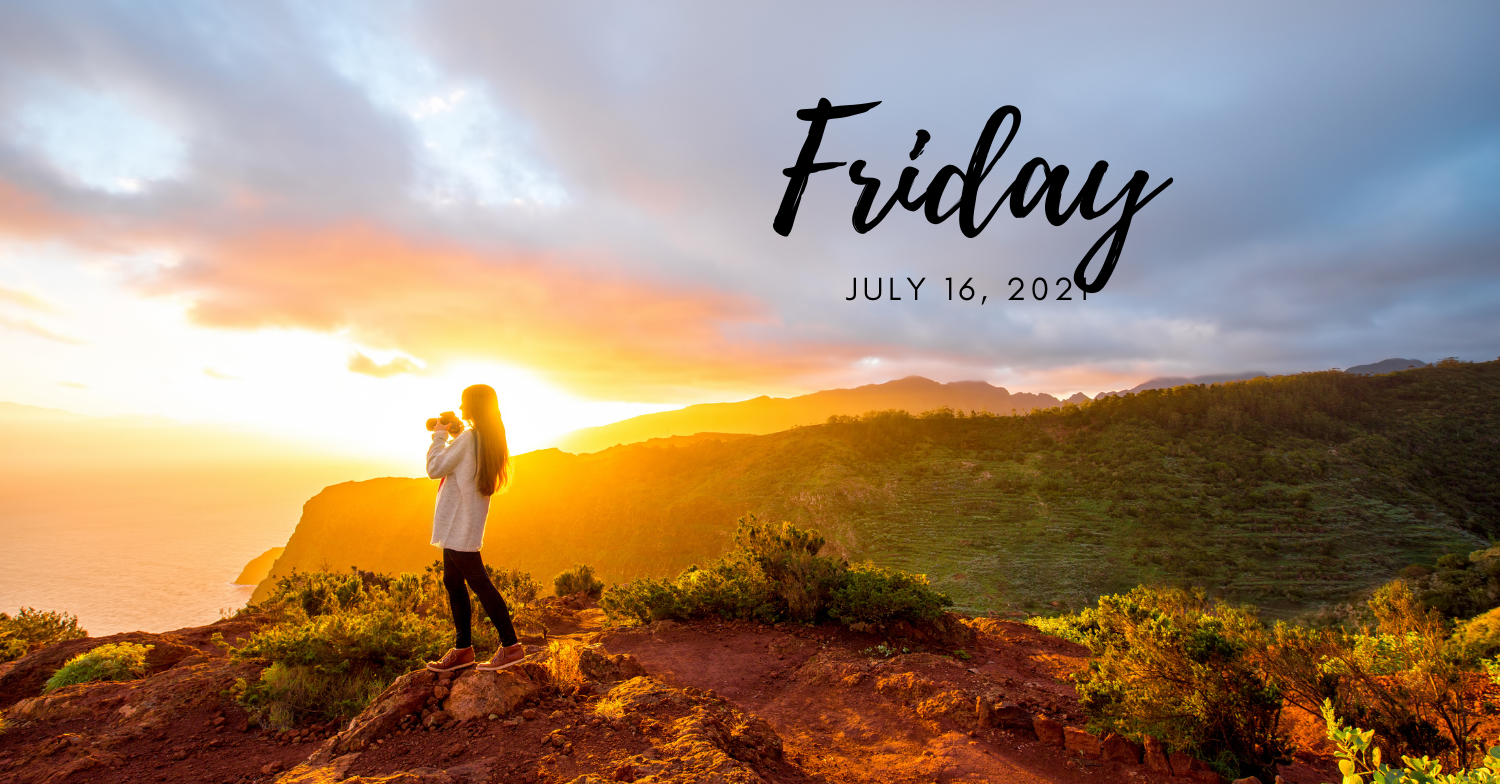 * WHO Chief Calls On China To Cooperate With Covid Investigation

* This Is The Worst Inflation Since The 1970's And The Stage Is Being Set For The Total Collapse Of The U.S. Economy

* Moderna's Next Act Is Using mRNA Against Flu, Zika, HIV, And Cancer

* Obama's Health Secretary Unvaccinated Americans Should Not BE Allowed To Work, Have Kids Near Them

* The Delta Variant Message To Anti-Vaxxers It's Your Funeral

* For South Africa To Survive We Must Publicly Hold Everyone Accountable

* Biden On Infrastructure Negotiations: 'I Don't Think It's Dead. I think It's Still Alive'

President Joe Biden and German Chancellor Angela Merkel vowed to work together to defend against Russian aggression and stand up to anti-democratic actions by China.

WHO Chief Calls On China To Cooperate With Covid Investigation

Jul.15 -- The World Health Organization’s director general called on China to cooperate in a second phase of studying the origins of the coronavirus as the pandemic rages on around the world. Tedros Adhanom Ghebreyesus spoke at a media briefing Thursday.

More than 30 people have died and dozens are still missing in western Germany following torrential rain and flooding overnight Wednesday.

One of the hardest-hit areas was the wine-growing, hilly Eifel region in the state of Rhineland-Palatinate. Six houses collapsed in the village of Schuld, and authorities say another 25 buildings in the village are at risk of caving in.

In response to offers of help from the public, Koblenz Police have asked people to stay away from the Eifel's Ahrweiler region, but to upload any footage of the floods to social media to help them locate the missing. Authorities in Koblenz tweeted Thursday morning that 18 people had died in the region. Read More

More than 30 people have died and dozens were missing Thursday in Germany and Belgium as heavy flooding turned streams and streets into raging torrents that swept away cars and caused houses to collapse.

The Donald Trump-fueled descent of the GOP into a party of reality-rejecting, science-denying conspiracy theorists is well-documented, and a growing phenomenon, as the extreme factions of the party overtake or push out the relatively few moderate Republicans remaining. And almost nowhere is the enduring harm of the Trump years more apparent than in the American right's response to the Covid-19 vaccine. Vaccinations, long rightly heralded as miracles of modern medicine that have saved millions of lives, are suddenly ideologically divisive along party lines. Read More

In one of the most aggressive military efforts to combat rising Covid-19 infections, the commanding general of the Army base at Fort Rucker, Alabama, issued new orders Tuesday that for the first time will compel servicemembers to show proof of vaccination to their leaders.

In a video posted on Facebook, Maj. Gen. David Francis said the move was necessary because of "rising rates" of Covid-19 cases in surrounding counties, as well as case rates on the base. The new rule, one of the most restrictive in the military, is largely aimed at unmasked military personnel. "If you are not wearing a mask, the leadership will be able to ask you as soldiers" to show proof of vaccination by showing a vaccination card, Francis said. Read More

Sen. Chuck Schumer (D-NY) speaks about the expanded child tax credit on the Senate floor. The credit was part of the American Rescue Plan, which did not receive any Republican votes.

Facebook advertisers and even Facebook Inc. itself are currently panicking since Apple fans, especially the iPhone and iPad users, are now rejecting their cross-app and cross-site tracking.

In this photo illustration, the Facebook logo is displayed on a TV screen on September 09, 2019 in Paris, France. Several US states have launched antitrust investigations against web giants including Facebook and Google with the viewer their business practices, but also the collection and exploitation of personal data.

It all began after Apple decided to release a new software update, which allows them to opt out of user data tracking in applications and websites. Facebook is not the only social media giant affected by the sudden system change. Even Instagram and other online platforms are affected. Because of this, Branch, an analytics firm, released a new data finding showing that only around 25% of iPhone and iPad users are opting into Facebook's cross-site and cross-app tracking. Read More

German Chancellor Angela Merkel expressed shock and sorrow Thursday at the deadly floods in her country, saying many people had died and pledging that everything would be done to find those still missing.

CNBC's Charlotte Reed reports on the announcements made by France's President Macron to encourage vaccination against Covid-19 in the country as cases surge due to the delta variant.

Californians 'Fed Up' With COVID Restrictions: 'Enough Is Enough'

CHICAGO - An unprecedented heat wave and ongoing drought in the U.S. Pacific Northwest is damaging white wheat coveted by Asian buyers and forcing fruit farm workers to harvest in the middle of the night to salvage crops and avoid deadly heat.

The extreme weather is another blow to farmers who have struggled with labor shortages and higher transportation costs during the pandemic and may further fuel global food inflation.

Cordell Kress, who farms in southeastern Idaho, expects his winter white wheat to produce about half as many bushels per acre as it does in a normal year when he begins to harvest next week, and he has already destroyed some of his withered canola and safflower oilseed crops.

The Pacific Northwest is the only part of the United States that grows soft white wheat used to make sponge cakes and noodles, and farmers were hoping to capitalize on high grain prices. Other countries including Australia and Canada grow white wheat, but the U.S. variety is especially prized by Asian buyers. Read More

This Is The Worst Inflation Since The 1970s, And The Stage Is Being Set For The Total Collapse Of The U.S. Economy

Moderna’s Next Act Is Using mRNA Against Flu, Zika, HIV, And Cancer

Moderna just hit a $100 billion market cap. Here's what's next for the biotech company after its Covid vaccinehttps://t.co/BAYvzDGvN9

Obama’s Health Secretary: Unvaccinated Americans Should Not Be Allowed to Work, Have Kids Near Them

She also argued that unvaccinated Americans should not be allowed to work or be around kids. Sebelius made the quite extraordinary and controversial claims on CNN. Watch:

Gen. Mark Milley Compared Trump Supporters To Nazis: ‘These Are The Same People We Fought In World War II’

General Mark Milley, the chairman of the Joint Chiefs of Staff, compared supporters of former President Donald Trump to Nazis, according to a new book.

Milley, who has been widely criticized for being “woke,” claimed that Trump was preaching “the gospel of the Führer” when he contested the results of the 2020 election and claimed that Trump had led the U.S. to the brink of its own “Reichstag moment,” a reference to an incident in 1933 that Nazi dictator Adolf Hitler used to consolidate political power in Germany. Read More

With about a third of adults in the U.S. still completely unvaccinated, and cases of COVID-19 on the rise, the U.S. surgeon general is calling for a war against "health misinformation."

On Thursday, Dr. Vivek Murthy released the first surgeon general's advisory of his time serving in the Biden administration, describing the "urgent threat" posed by the rise of false information around COVID-19 — one that continues to put "lives at risk" and prolong the pandemic. Read More

The Delta Variant's Message To Anti-Vaxxers: It's Your Funeral

The Delta variant is here. It's now responsible for the majority of COVID-19 infections in the United States and is driving a rapid rise in cases, not only in red states like Arkansas but in true blue New York City.

But while the Delta variant is much more contagious than either the original strain or the Alpha variant that first appeared in Britain, and has shown greater ability to infect vaccinated individuals, all the vaccines approved for use in the United States have so far proven highly effective in preventing severe disease and death.

So it's understandably maddening that much of the American right has decided this is the time to double down on making opposition to vaccination a central front in our endless culture war. Read More

For South Africa to survive, we must publicly hold everyone accountable

The violence of the past five days in two of our nine provinces has shown us, again, that there are continually important lessons to learn about our society. There’s a simple underlying message though: things must change or this pattern will repeat itself ad nauseam. One of the key lessons is that there must be legal accountability for the lawbreakers.

It is obvious that the people who created, arranged and participated in the violence all broke the law. But, if they are held properly accountable — from those who fomented it, all the way to those who simply took part in it — it may be that the roots of our recovery as a nation lie in this violence. Read More

Sen. Bernie Sanders (I-VT), who is also chairman of the Budget Committee, released a video detailing what is in the new $3.5 Trillion spending plan Democrats have proposed.

Biden On Infrastructure Negotiations: 'I Don't Think It's Dead. I Think It's Still Alive'

You're on PRO Robotics and in this video we talk about the WAIC 2021 Robot Expo. The latest developments in robots and artificial intelligence were presented at the Robot Expo in China. New drones, cities of the future, autonomous buses - all this and more you will learn from the high-tech news release.