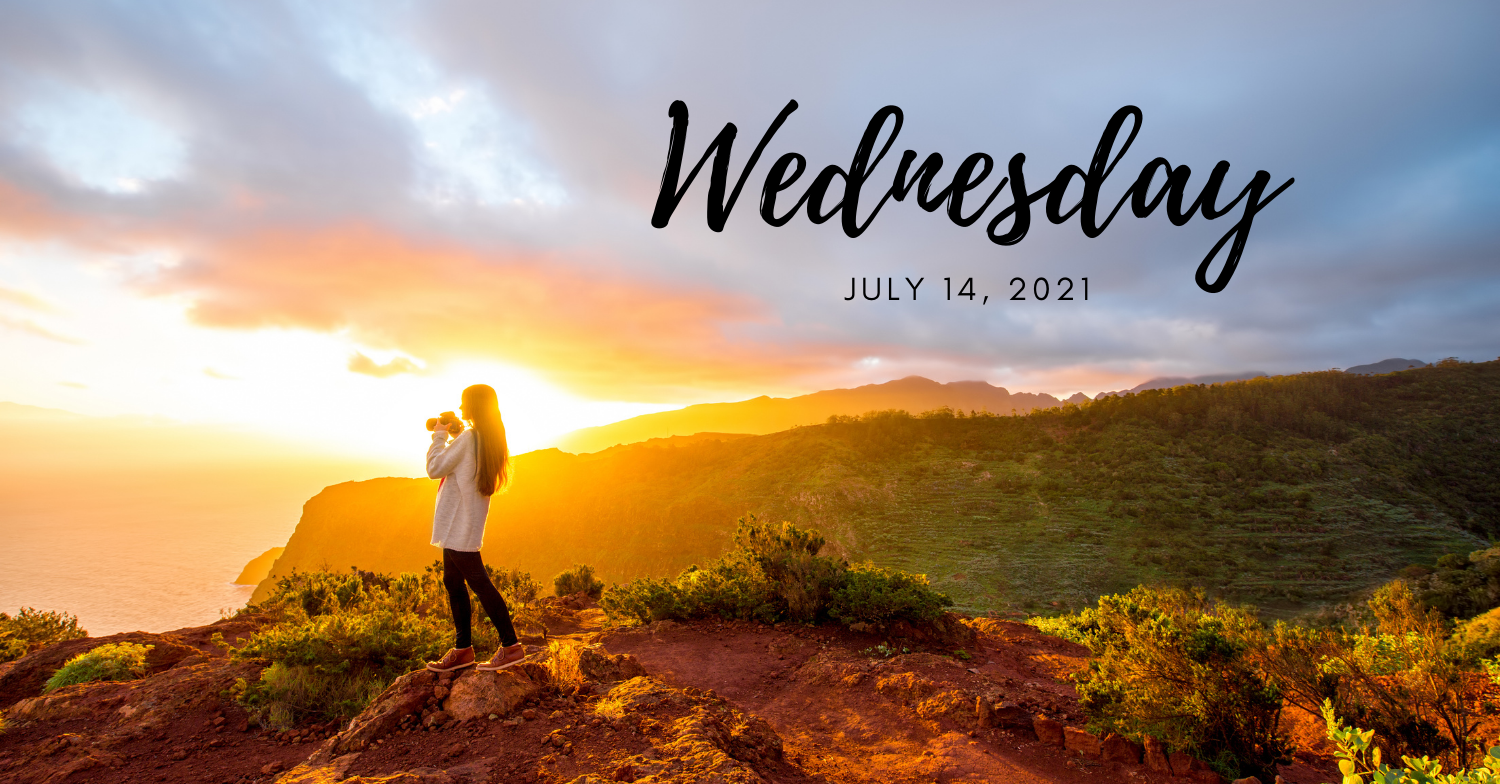 * Part Of Palmetto Expressway Shut Down Because Of Protesters

* WHO Is Working On 'Digital Wallet'

The United States Olympic Committee is considering redesigning the American flag on its logo to include just five stars and five stripes.The redesign would replace an existing logo which has the full 13 red and white stripes, but just 13 stars. The logo would also change the layout of the stripes on the flag.

The changes, if brought in, would come into effect for the Paris 2024 Olympics. It would not be changed for the Tokyo Olympics this year or the 2022 winter Olympics in Beijing.But Fox News host Sean Hannity, who first reported on the changes, slammed it as 'an awful idea'.

The redesign comes amid controversy over 'activist athletes' like hammer thrower Gwen Berry turning their backs on the flag at sporting events. Read More

'WE ALREADY HAVE A FLAG'
EXCLUSIVE: Sean Hannity blasts US Olympic Committee's potential redesign of the Stars & Stripes https://t.co/8ilQY0QeaX

JACKSONVILLE, Fla — How much of your world has permanently become more digital?

If for you that list includes health care, you're probably taking advantage of virtual doctor's visits known as telehealth. New robots are being used in Jacksonville to expand access to health care and make sure you don't delay a doctor's visit.One reason this is important is the pandemic isn't over. In Duval County, the new case positivity rate is almost 16% according to the Florida Department of Health.

Nursing students at Jacksonville University are using new telehealth robot technology. The robots are controlled by someone elsewhere and a doctor can appear on its screen to communicate with nurses and patients. Read More

US Media Shamefully Justified A String Of Canadian Church Burnings

One day this month in Canada, 10 Catholic churches were vandalized in a single city, Calgary. In the last month, arsonists and vandals have attacked dozens of Canadian churches, burning some entirely to the ground.

America has 70.5 million Catholics; Canada, with just over a 10th of the population, has close to 13 million. So this is a big story. Yet the US media aren’t interested in reporting our northern neighbor’s plague of church burnings — except to suggest it’s understandable. Read More

Jul.13 -- Violent protests have dealt a body blow to South Africa’s efforts to rebuild the economy in the wake of the coronavirus pandemic and pose the sternest test yet to President Cyril Ramaphosa’s authority.

Democratic members of the Texas House of Representatives stood in front of the U.S. House in Washington on Tuesday after leaving their state and blocking action on a GOP-sponsored voting measure in Texas that they say amounts to voter suppression. The lawmakers also urged members of Congress and President Biden to act to preserve voting rights nationwide.

Biden is to address the issue later Tuesday in Pennsylvania.More than 50 Democrats arrived in Washington on Monday night, depriving the Texas House of the two-thirds of the 150-member body needed for a quorum to conduct a vote. Read More

At the weekly press briefing of the Senate GOP leadership, Senate Minority Leader Mitch McConnell (R-KY) and Sen. John Thune (R-SD) responded to Texas House Democrats who fled their state to stop the passage of a voting reform bill.

NASHVILLE — Across the country, public health officials have left their jobs, strained by a pandemic unlike anything they had confronted before, then tested further as the coronavirus and vaccines became entangled in politics and disinformation.

In Tennessee, the state’s top immunization official, Michelle Fiscus, said this week that she was forced from her job after writing a memo describing a 34-year-old legal doctrine that suggested that some teenagers might get vaccines without their parents’ permission. Dr. Fiscus’s memo came as conservative lawmakers in the state were lashing out at efforts by her agency to raise awareness of vaccines among teenagers. Read More

Part Of Palmetto Expressway Shut Down Because Of Protesters

MIAMI-DADE COUNTY, Fla. – The Palmetto Expressway was closed in both directions between Coral Way and Southwest 8th Street on Tuesday afternoon as a group of protesters took to the streets in solidarity with the people of Cuba.

The Palmetto southbound has reopened at the Dolphin Expressway, while northbound remains closed at Coral Way, with all traffic forced to exit, according to Total Traffic Miami.Florida Highway Patrol cars have been at the scene, and drivers are urged to avoid the area. Florida’s Turnpike can be used as an alternate route. Read More

#BREAKING - Part of the Palmetto Expressway is shut down near Coral Way due to demonstrators rallying for freedom in Cuba.https://t.co/w2cLtkX4YK

More than 1 million people in France have made appointments to get the coronavirus vaccine after French President Emmanuel Macron said COVID-19 passes would soon be needed for daily activities.

Doctolib, the centralized vaccine appointment app for the country, announced Tuesday that 1.3 million people in France signed up to get the coronavirus vaccine, The Associated Press reported. The majority of those who signed up were under 35 years old.

The surge in vaccination appointments comes after Macron said proof of a coronavirus vaccination, a negative COVID-19 test or recent recovery from the virus would be needed to go into restaurants and stores. Read More

Pop star Olivia Rodrigo is heading to the White House on Wednesday to lend her voice to the Biden administration’s Covid vaccination campaign.

The Disney actor-turned-singer-songwriter will meet with President Joe Biden and his chief medical advisor Dr. Anthony Fauci at the White House, an official there confirmed to NBC News on Tuesday.

Rodrigo will cut videos highlighting the need for young people to get vaccinated and answering their questions about the shots. The videos will be shared with Rodrigo’s more than 28 million social media followers, as well as on White House accounts, the official told NBC. Read More

On Monday night Garland Favorito, the founder of the election integrity group VoterGA, announced he will hold a press conference on Tuesday morning.

VoterGA will review highlights of its amended ballot inspection complaint and provide proof that election fraud occurred in the November 2020 election. Read More

Instead, local political, public health and church leaders encouraged Ozarks people to focus on what the leader of the local health department called "the path forward" — getting vaccinated against the potentially deadly disease.         Read More

WHO Is Working On "Digital Wallet" To Store Vaccination Certification: Official

A World Health Organization (WHO) official said that the organization is working to develop a COVID-19 vaccine “digital wallet” and is also seeking to “increase the distribution” of an international certificate for those who’ve been vaccinated. Dr. Michael Ryan, an Irish epidemiologist who is head of the WHO health emergencies program dealing with COVID-19, made the remarks during a daily news briefing on July 12 in Geneva.

The organization, he said, will provide more “detailed data standards” for individual countries “to generate their own digital vaccination certificate, but that does not get around the policy issues around which vaccines are recognized within that system that that is essentially an international policy issue between countries.”

Ryan didn’t provide details about the digital wallet, which sparked concern and criticism on social media on July 12 about whether such an international vaccine passport-style system could be implemented by WHO for travel.          Read More

A recent report revealed the Biden administration has plans to work with tech companies and SMS carriers to monitor and combat misinformation, which was immediately met with skepticism and criticism by Republican lawmakers

On Monday, Politico reported plans from the Biden administration to battle misinformation in regards to the COVID-19 vaccine.

"The White House has decided to hit back harder on misinformation and scare tactics after Republican lawmakers and conservative activists pledged to fight the administration’s stated plans to go ‘door-to-door’ to increase vaccination rates," Politico wrote. "The pushback will include directly calling out social media platforms and conservative news shows that promote such tactics." Read More